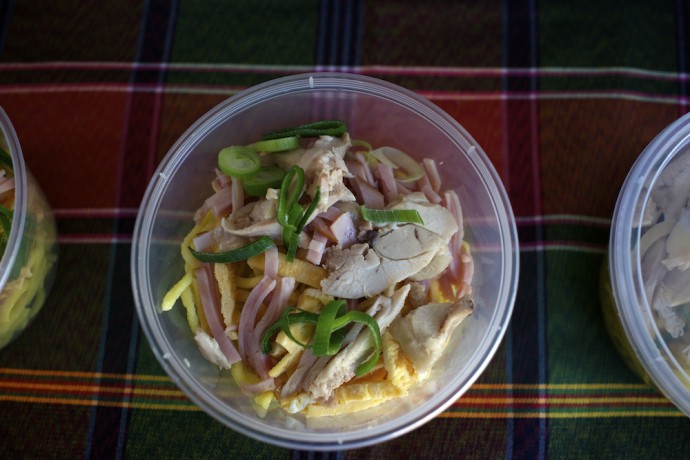 This recipe is the family dish of Mr Tang Wei, who came to Broome during the pearling era. His long soup became an important dish in his restaurant and for many Broome families. It has remained with his family who continue to make it for their family’s enjoyment.

•    Put the water on to boil first and then, in the meantime,

•    wash the meat and the chicken or the bones and soak them in hot water and then dry them out.

•    As soon as the water boils, get all the meat and chicken and put them into the saucepan.

•    One the chicken has cooked, remove the meat and set aside.

•    Put the bones back in the pot to continue simmering to add more flavours to the stock broth.

•    Add the egg, teaspoon of salt to the flour, mix the ingredients until the dough starts forming.

•    Mix in a small cup/bowl 4 x tablespoons of water and 1 teaspoon of yellow food dye.

•    Add the mix then to the dough. Place the dough on a rolling board and knead.

•    Flatten out the dough ball using a rolling pin, until it is thin enough to put through the cutter.

•    Dust with cornflour on both sides of the flattened dough.

•    Put the flattened dough through the noodle cutter to further thin and stretch it out. Continue with the flattening process until you get the desired thickness and length for your noodles.

•    Set aside noodles in a bowl and cover with towel.

•    In a large pot of boiling water, sit noodles in a Chinese-style strainer with long handle.

•    Allow to boil until in lightens in colour and noodles float, then it’s ready – al dente.

•    Take the noodles out and place with in a bowl of cold water. (This stops the process of overcooking)

•    Take the noodles out of the cold water and set aside.

•    Break a couple eggs, mix, and then add a dash of water to help break up the egg.

•    In a very small frypan, add a small amount of oil or butter.

•    Pour the egg mix into the frypan, and make your omelette, set aside.

Preparing the dish to serve:

•    Thinly slice the omelette, the cooked chicken breasts or thighs and spring onions, set aside.

•    Place a handful of noodles in a small serving bowl.

•    Place a pinch of sliced omelette on the noodles, followed by the sliced ham, sliced spring onions then the sliced chicken.

•    Put a dash of light soy sauce, salt and pepper to taste, then top with a ladleful of the chicken stock broth.