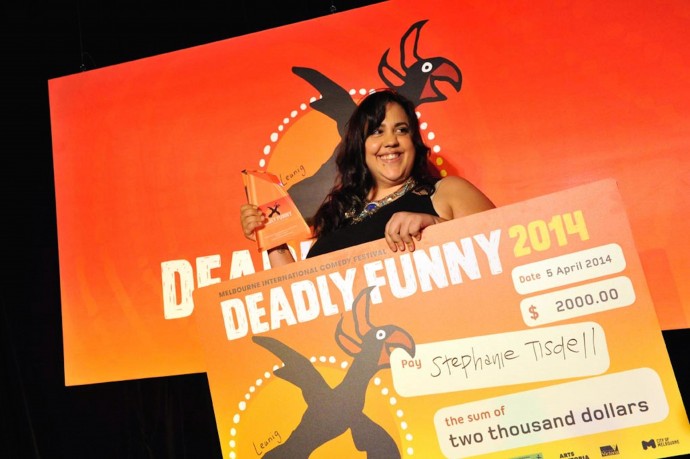 Deadly funny Stephanie Tisdell was crowned the queen of comedy

Last Saturday at the Melbourne Town Hall, Melbourne International Comedy Festival celebrated more than 60,000 years of jokes and hilarious story telling by the longest living culture on the planet.

The National Final and Showcase of Australia’s premier Aboriginal comedy program, Deadly Funny had everyone in hysterics.

For the first time in Deadly Funny’s six year history, an all-female line-up of four finalists went head to head to battle it out for the most laughs.

The winner for 2014 was 21 year old, Stephanie Tisdell from Queensland who blew the judges away with her upfront comedy style. Stephanie walked away with the National Deadly Funny title and a $2000 cash prize.

“Deadly Funny is a program we’re enormously proud of and dedicated to growing even further. And today demonstrated its value,” Deadly Funny producer Karin Farrell says.

“To have a cast of such diverse performers – fresh, funny and fiercely talented – showed just how layered Indigenous comedy can be. It’s accessible to all and ranges from jokes about family, to characters that challenge stereotypes, to beatboxing about politics.”

Earlier this year, entrants participated in workshops run by Australia’s funniest comics offering tips and advice on how to expand and develop performance techniques before the potential stars of tomorrow competed in heats held in the nation’s capital cities to determine the National Finalists.

The Melbourne Comedy Festival aims to promote the development and appreciation of comedy across Australia.

Partnerships and initiatives between the Festival and Indigenous communities have resulted in the success of numerous Indigenous comics including Tristan Savage, Shiralee Hood, Mia Stanford, Denise McGuinness and Kevin Kropinyeri, who describes the competition as “a stepping stone into the mainstream comedy world”.