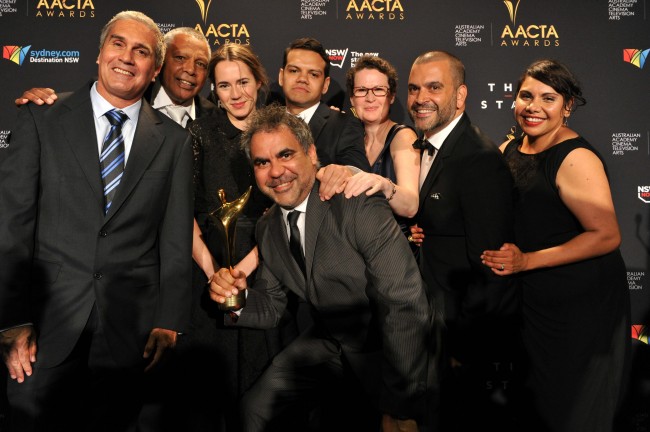 The cast and crew were thrilled with their award Photo: Jim Lee courtesy of AFI

“We were up against other terrific shows, really strong TV drama, so we didn’t quite believe it at first. But as it sank in – elation, and real pride at what everyone had achieved,” Producer of Redfern Now, Miranda Dear says.

In the Best Original Music Score in Television, Redfern Now was up against Mrs Biggs, Nowhere Boys and Top of the Lake but successfully triumphed over all of them with their score from Series Two, Episode 3 ‘Babe in Arms’.

Miranda Dear and Darren Dale attended the event held at the Star Casino in Pyrmont, Sydney.

“The whole office erupted with excitement. Everyone, cast, crew, writers and directors had worked so hard, given so much to the series, that it was great to receive such recognition,” Miranda says.

“Every award means something different but they’re equally special to us. It’s terrific to be acknowledged by such a prestigious award, and was an absolute highlight.”

Following the awards ceremony and in days to come, the producers, cast and crew celebrated their win.

“Let’s just say there was a lot of flowing champagne and not a lot of sleep!”

Other industry professionals and organisations have been very impressed and proud of the success of the show and Blackfella Films have since been subject to a rush of congratulations.

“We are still receiving emails, cards and phone calls to congratulate us. It’s such a great industry to be in and in moments like winning an AACTA Award, you find out just how supportive your peers and colleagues are,” Miranda says.

At the 2013 Deadly Awards, Redfern Now won TV Show of the Year and stars Luke Carroll and Deborah Mailman also won Male and Female Actor of the Year.

When asked if viewers can look forward to an upcoming series, Redfern Now is going to keep its loyal and anticipating audience guessing, with Miranda simply stating:

“You will have to wait and see.”