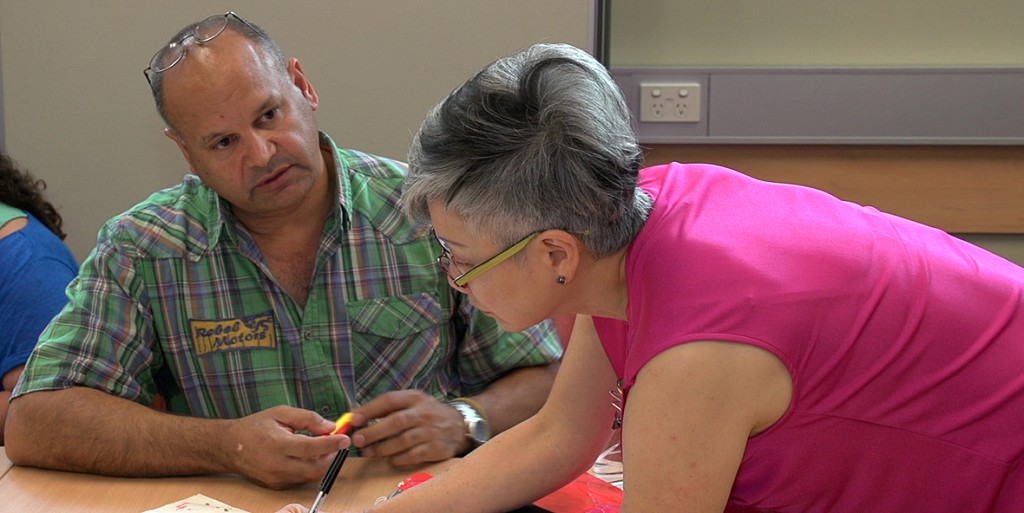 Pictured: Scott Gorringe from the Mithaka people of Channel Country with forum host
Professor Poh-Ling Tan from the International Watercentre.

The Putting Aboriginals in the Driver’s Seat: Protecting Land and Water in Queensland forum was organised to challenge Premier Campbell Newman to deliver on an election promise to put them in the driver’s seat on decisions affecting their land. It is the first time that Indigenous people have travelled from across the state to meet on this important issue.

In the lead up to the 2012 election, Mr Newman made the promise that he’d give Aboriginal people and Torres Strait Islanders a voice to empower them on decisions about development and other issues affecting their Native Title land. Thus far he has failed to deliver and frustration has boiled over.

Some of the leaders who made the journey to Brisbane were David Claudie from western Cape York; Cheryl Buchanan, the Deputy Chair of the Northern Basin Aboriginal Nations; Cameron Costello, Quandamooka CEO of the Quandamooka Yoolooburrabee Aboriginal Corporation; Bidajara man Gerry Fogarty from Barcaldine in the state’s central west; and Scott Gorringe from the Mithaka people of Channel Country.

Scott Gorringe said last month’s forum went well, but it may have fallen on deaf ears as their pleas are going unnoticed.

“We need to be able to be heard and the fact is that there is an Aboriginal voice out there and it’s loud and clear, it’s just not ours. This government is choosing only to listen to one Aboriginal voice and, as we know, there are many,” he says.

“We’re asking this government to be able to be flexible, strong and respectful enough to be able to listen to the different Aboriginal groups and let us speak for our country and mob.”

He also says that the mining for coal seam gas in his area, as well as others, is pushing the land to its limits, and it’s time the traditional custodians, who have more than 40,000 years of land-management knowledge in their blood, had a proper say.

“They’re pumping our waterholes dry for roadworks for their mining operations, with no consultation with Aboriginal people. These extraction methods are dangerous to underground water and above-ground water,” he says.

Scott believes that more engagement is paramount to saving the land and water, and to making it sustainable to live on country.

“Let’s get a little more actively engaged in what is happening on country and the decisions being made and how they’re being made. We need to get informed about these things and we can’t sit back waiting. We have to come together as a group of people and stand up for this country, otherwise our waterways and our land is going to be damaged,” Scott explains.

“We’re not against progress. We’re not dumb enough to think we can’t go through our lives without economics and money; we all like our TVs and electricity but not at the expense of wrecking water and land. Surely we’re a little more sophisticated than that.

“I commend those people who are getting heard and I ask them respectfully to help us get our voice heard, that’s all they need to do. So we can have a say on what’s happening on our country, we want to be put in the driver’s seat.”