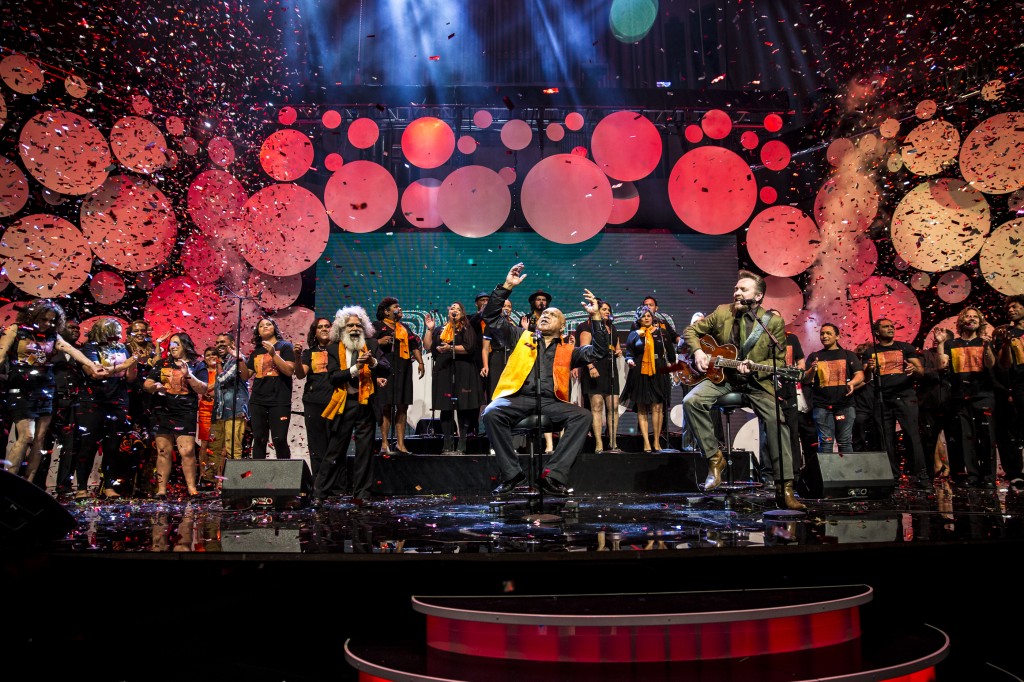 The first female Aboriginal barrister and magistrate in Australia, Pat O’Shane was honoured at the 2013 Deadly Awards, winning the Marcia Langton Award for Lifetime Achievement in Leadership.

She was among AFL highflyer and anti-racism campaigner Adam Goodes who received the Hall of Fame Ella Award for Lifetime Achievement in Sport, and world winning title boxer Daniel Geale who is the 2013 Male Sportsperson of the Year.

It was a night for paying tribute to the trailblazers at the 19th annual Deadlys, held at the Sydney Opera House on Tuesday. Iconic singer/songwriter and Human Rights Awardee Archie Roach also stepped onto the mainstage to receive his Deadly for the Lifetime Contribution Award for Healing the Stolen Generations.

But there was room on the Deadlys stage for all the winners from the Most Promising New Talent categories of music and sport, through to the television shows and films that are gaining ground with Australian audiences.

No surprises for NRL Player of the Year in Jonathan Thurston who enjoys a strong fan base amongst his people, and non-Indigenous Australians. Adam Goodes also picked up AFL Player of the Year, a testament to the support he has both on and off the field.

Junior Wimbledon champion Ashleigh Barty won her first Deadly for Female Sportsperson of the Year. In the music awards Jess Mauboy won in two categories, Single Release of the Year and Female Artist of the Year. Archie Roach’s recent album Into the Bloodstream was the Album of the Year.

Northern Territory singer Shellie Morris who recorded her album Together We Are Strong in the Yanuwa language of her people, won the award for Excellence in Aboriginal and Torres Strait Islander Cultural Advancement and ethnobotanist Gerry Turpin is the inaugural winner of Scientist or Science Project of the Year.

Published Book of the Year went to the central Australian NPY Women’s Council Aboriginal Corporation’s Traditional Healers of Central Australia: Ngangkari publication – the Ngangkari are traditional healers and the book is an absorbing collection of first-hand accounts, tracing the personal histories from pre-contact time through to the present.

On a night where performing artists were honoured as role models, Arrente man, actor and one of the first Aboriginal men from South Australia to enlist in the Korean War, Steve Mullawalla Dodd was honoured through the Jimmy Little Award for Lifetime Achievement in Music and the Performing Arts.

Steve has earned his stripes on film and television sets in a career that spanned 67 years. Born in 1928, Steve has performed in some of Australia’s most prominent movies including Gallipoli, The Chant of Jimmie Blacksmith, Ground Zero, and in television drama: Homicide, Division 4, Rush and the Flying Doctors.

The Deadlys is produced by Vibe Australia. It’s the biggest Indigenous awards night on the Australian calendar and enjoys strong support from Indigenous communities across the country, and across non-Indigenous Australia.

The Deadlys® 2013 will air on SBS ONE on Sunday 15 September at 9.30pm and repeated on NITV on Wednesday 18 September at 9.30pm. You can keep up to date with all the Deadlys® news at facebook.com/vibeaustralia and through Twitter @Deadly_Vibe #deadlys. You can also head to www.deadlys.com.au and subscribe to Deadly Vibe Wire at www.vibe.com.au