Chern’ee Sutton has had a phenomenal amount of success in the three short years that she has been painting. While she has always enjoyed art and drawing, it wasn’t until she was encouraged by her school to enter a Bundaberg art competition, where she took first place in the open division, that she began to take art more seriously. 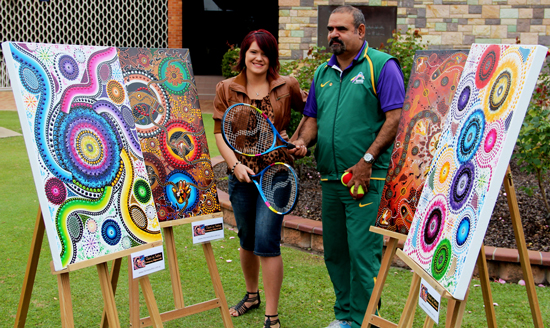 She’s been painting ‘madly’ ever since. So which are her favourite work so far? “I actually have two favourite paintings,” Chern’ee says. “The first is called ‘Ajarku Muruu’ , which in the Kalkadoon language means ‘All One Country’. It represents Australia’s movement forward towards equality and a united country. It now hangs on the Reconciliation Level of Queensland Parliament.

“The second painting is called ‘Battle Mountain’ and represents the Kalkadoon peoples’ greatest and last stand against the first Paramilitary force assembled in Australia.
This painting is currently hanging in the Minister for Aboriginal, Torres Strait Islander and Multicultural Affairs’ office.”

Now in her final year of high school, Chern’ee is busy juggling the demands of study and painting, but she says she’s prepared to work hard to follow her passion. “I’m very dedicated to both my schoolwork and my artwork,” she says. “My parents have always told me that you don’t get anywhere in life unless you work hard for it, even if that means sacrificing social events with my friends. I would not be where I am today without the support of my parents.”

Chern’ee recently presented four artworks to Tennis Australia, which they’d commissioned and will reproduce across national Indigenous tennis initiatives. She was also awarded a scholarship by Tennis Australia in recognition of her talent, which will go towards her ongoing art education. As well as being dedicated to her art, Chern’ee also has an interest in social issues.For the past couple of years she has participated in the YMCA Queensland Youth Parliamentary Program. “It was a fantastic experience and I met many open-minded people from all different walks of life,” she says. “I was in the Multicultural and Indigenous Affairs Committee last year. The basis of my bill was about having permanent dedicated Indigenous seats in Parliament House who could vote, and give an Indigenous perspective on issues facing Indigenous people in Queensland.”

After Chern’ee completes her schooling this year, she plans to take a gap year in 2014 to concentrate simply on her art. She sees her future being in art. “I’d love to share my history and culture with others,” she says. “I also might try politics or media.” Chern’ee has some advice to other young people hoping to follow in her footsteps to make their dreams a reality. “Always follow your dreams and never give up, anything is possible if you set your mind to it. When obstacles get in your way or knock you down, get back up and fight harder to achieve your goals.”