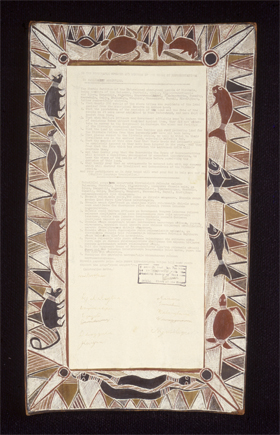 The theme for NAIDOC Week 2013 is We value the vision: Yirrkala Bark Petitions 1963 and proudly celebrates the petitions’ 50th year. In Yirrkala in North East Arnhem Land, NAIDOC Week is particularly significant this year.

The Yirrkala Bark Petitions were created by the Yolngu people as a response to the injustice of the theft of land by the Government and were the first traditional documents recognised by the Federal Parliament.

“The ceremonial elders were politicised through this theft and took the system on, assuming it to be one based on law, and approached it as petitioners to the Parliament for protection,” Buku-Larrnggay Mulka Centre Co-ordinator Will Stubbs says.

“It’s difficult to understand that all those years ago; all these amazingly gifted leaders were regarded as no more than fauna in their own country.”

This year, the NAIDOC committee has chosen the Bark Petitions as the theme of NAIDOC Week and the people of Nhulunbuy are excited to be hosting the main event that Prime Minister Kevin Rudd will be attending.

“It’s really fantastic that the NAIDOC committee has chosen the Bark Petitions as the theme of this year in conjunction with their 50th anniversary,” Will says.

“A lot of Australians don’t realise that one of Australia’s most valuable art pieces – The Yirrkala Church Panels is in our art centre here.”

The two four metre panels depict the law of the Yolngu people in north-east Arnhem Land. They were made before the Bark Petitions and Will refers to them as the mother and father of the Bark Petition.

“We’re going to allow for photography of these church panels for the first time so everyone can see how special they are and Gurrumul is going to have a concert here for the community.”

Along with the Prime Ministerial visit and the concert, Nhulunbuy will hold a range of activities to celebrate NAIDOC Week including seaside markets.