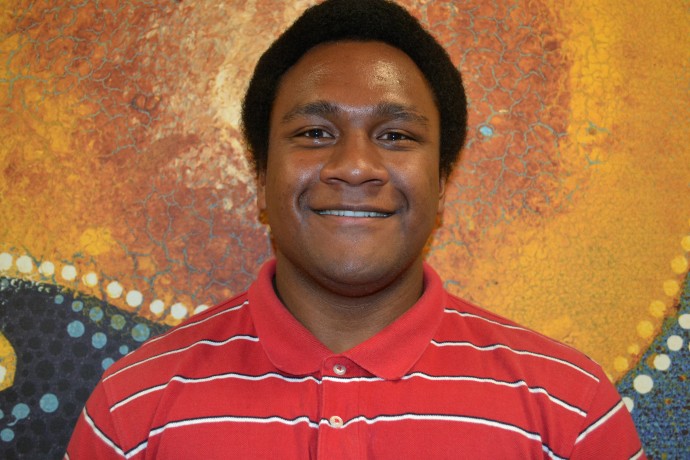 Torres Strait Islander man Harry Pitt has been announced as the winner of the National NAIDOC Poster competition.

The theme for 2014 is Serving Country: Centenary & Beyond. Harry’s entry captured the essence of the theme in a clever and attractive way.

The poster depicts three brothers with their land behind them and the horizon before them. Their Elders are reflected in the water, giving the brothers the strength to overcome the challenges that may lie over the horizon.

The poster will be officially unveiled later in the year, ahead of NAIDOC Week 2014.

“My work acknowledges the young men and women of today who are across the sea doing their very best to protect their home and serve their country, empowered by their ancestors,” Harry told NAIDOC.

“Our soldiers are embracing their heritage and protecting their homes, just as their ancestors did before them, only now they do this beyond the shores of their homeland.”

As a student at the University of Wollongong, Harry first heard about the competition when, out of desperation, he visited the Indigenous student centre.

“I was in debt from the [university] fee from last year and I needed some help. I came to the Indigenous centre and they pointed me towards this competition that they had, so I entered it and wished for the best,” Harry says.

“It took me about a week or so and I used a graphic duo pen. It’s a very good texta too; I use it to colour in some of my artworks. It’s something new to me but I’m slowly beginning to learn how to use it and some of its limitations.”

When Harry received the news that he had won, he could hardly contain his excitement.

“When I got the call I was talking to my friend and I had the choice between talking to him or answering the phone. I answered it and when they told me the news, I literally wanted to scream and jump in the air and yell out,” Harry says.

“I couldn’t though, because I was in public and everyone was looking at me. I had the biggest smile on my face and I held onto that smile for about four weeks.”

Harry will now attend this year’s National NAIDOC Awards Ceremony with his family to officially receive his award.

This year the ceremony will be held at the Gold Coast on Friday July 11. Follow NAIDOC on Facebook to stay up to date and to purchase tickets.