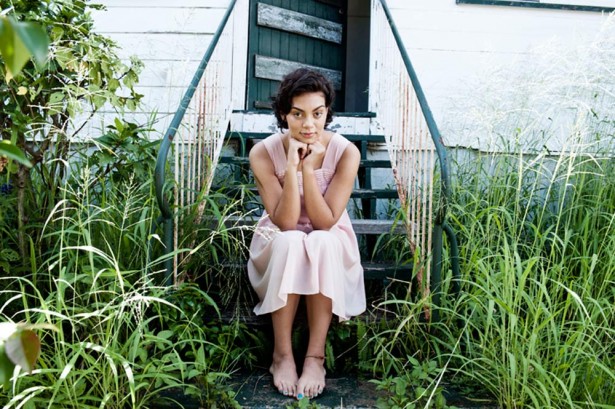 Singer/songwriter Thelma Plum has gone from strength to strength in the past year, releasing her debut six-track EP Rosie following her 2012 Deadly for best emerging talent. Since the homemade demo of Father Said and her Deadlys® win, Thelma has recorded her debut EP with Tony Buchen (John Butler/Washington) in late 2012.

In the past year or so, the Brisbane Music Industry College graduate has also won a Triple J National Indigenous Award and signed with Brisbane’s Footstomp Music (home of Busby Marou and King Cannons). She has opened national tours for Bob Evans and Emma Louise and is keenly sought after for festivals – jam packing her tent at Bluesfest in April.

The inaugural Sydney Opera House Deadly Award went to the 18-year-old up and coming talent from Brisbane and her songs Around Here , Father Said and Dollar are now making their way into the nation’s consciousness. The Sydney Opera House Deadly includes recording time in the SOH Recording Studio with state-of-the-art technology, and is run by a team of Grammy Award-winning professional engineers. It’s an Industry award and judged by the Deadly Academy from the list of Deadly nominees. It aims to help the winner develop their approach and skills with live recording and enable a recording mix that can add to their marketing potential.

Thelma’s first headline national tour to celebrate the Rosie EP will wind its way around Australia in July – so catch this young emerging talent if you can. Nominations for The Deadlys® – including the music awards – are open and the Sydney Opera House Deadly is back in 2014.

CLICK HERE TO NOMINATE FOR A DEADLY AWARD IN 2013!