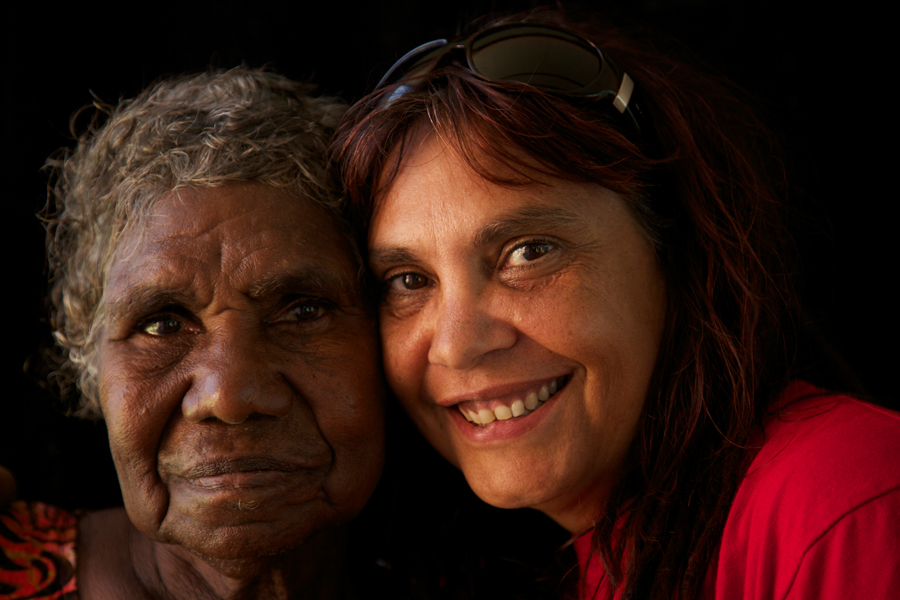 Before Shellie Morris and The Borroloola Songwomen’s new album Ngambala Wiji li-Wunungu (Together We Are Strong) was released, it had already won two national awards.

As the beautiful, traditional songs make their way into our consciousness, the album recorded totally in the Yanyuwa language is being acclaimed both here and overseas. Ngambala Wiji li-Wunungu (Together We Are Strong) released nationally via ABC/Universal on 7 June, is a career highlight for the Northern Territory based singer songwriter, described by many as one of Australia’s finest Indigenous female, musical talents.

Working with family members from her grandmother’s country in Borroloola NT, the album merges Shellie’s contemporary vocals with that of her traditional culture, and country. Making the album, going back to country and reconnecting with her family, has been a powerful and healing journey for Shellie who is a Stolen Generations survivor.  “It is very much a shared project and journey. I used my musical skills and opera training when writing the traditional songs, and there was so much encouragement from everyone involved in the sharing of traditional stories. It was the first time I learned those stories and in language,” she says.

Shellie has been working in remote communities over 15 years and sings in over 17 language, but her new album, she believes, is the first time an entire album by Aboriginal women in language has been recorded. Learning the Yanyuwa language – the language of her country – was a challenge she was ready for. “It is the most important thing I’ve done to date and it took years of work to get it to release, but we were gentle with it and waited, working on it over two and a half years,” she says. “We are stoked our voices are being heard throughout the world and the album has already won two national awards, and there has been a great response to it in Australia and overseas, in Germany, Switzerland and Brazil. “I’m thankful for that response as an artist because we loved making the album. In Borroloola none of the kids were speaking the language and now they are singing the songs in language. The songs are also being played at during sorry business, and that is a great honour. “We recently played at the Darwin Festival to a sold out audience. They wanted an encore and were banging on the walls – the [Borroloola] ladies couldn’t believe they were cheering for us and thought they were going to break down the walls. “The album has raised the community’s self esteem. We’ve seen a lot of men singing Yothu Yindi and Warumpi Band songs but to have the legacy of our women coming out, that’s very exciting.”

One of Shellie’s favourite tracks from the album is Li-Anthawirriyarra a-Kurija – Saltwater People Song, as it was her nan’s song written for the Stolen Generations. “She never got to hear me singing in language because she had passed by then, but after the recording we sat down and wept.” Despite the hardship Shellie sees in communities across remote NT, working with young people through music workshops, she has found humour and joy too. “All the communities have learned to laugh and the older you get, the funnier you get. The laughter helps with a sense of youthfulness and belonging, whereas in the big cities everybody is very serious, wanting to fit in and concerned about their job or status,” she says. “Before I came back home to the NT, I used to live in Sydney, and I was like that too. It was really important for me to fit in and I was very nervous at first but now I know I fit in and that quietness is the key. In the bush the quiet moments are the right ones. I’ve finally found what I’m looking for.”

For Shellie releasing Ngambala Wiji li-Wunungu (Together We Are Strong) was the highlight of her career and she’s keen to take this experience of working with culture and language in communities to the US and Canada, to work with Indigenous peoples. “Perhaps mixing their songs with ours – that’s a big dream that I have.” Her work with communities and her gigs are very important to her, still. “It’s important I remain true to the grassroots – I’m not a fly in, fly out person.” Today, there are fewer than 10 fluent speakers of the Yanyuwa language in the world. Shellie’s album is helping to preserve and sustain this language. “When I first went home to find my family, I asked my sister who grew up on country speaking the language, what I should do. She said ‘just be honest. Just be you’. And that was great advice. I’m thankful for the very strong women in my life, and that I can stand up for my culture.” For more information on Shellie, her music and the new album, head to: http://www.shelliemorris.net/