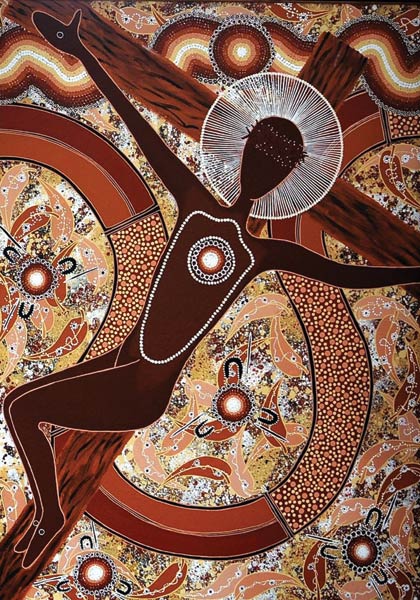 Born in Bowraville on the north coast of NSW, Richard is of Gumbaynggirr/Dhungutti descent. His first exposure to traditional arts came from his family.

“When I was a kid I used to sit down with my father,” he says. “He used to make a lot of tools like boomerangs and shields and I would watch him, help him out and paint them.”

Like many others at the time, Richard was taken from his family at the age of nine and put in to the Kinchela Boys’ Home. From that day, the content of his education changed, but he would always carry the knowledge that his father passed on. Being part of the Stolen Generations has impacted on Richard’s life and it’s a subject that he touches on when he gives talks about his art and life at schools and churches.

Having received minimal education at Kinchela, Richard decided a few years ago that he would like to obtain a degree, so he successfully undertook a three-year visual arts program at Deakin University.

“I didn’t know how to mix paints until I started my study. I knew how to sketch, but I had to go somewhere to learn a bit about artwork. Studying was hard. It took me a long time, but I got there,” he explains.

What surprised him the most was when his lecturers started looking to him for answers. “They were asking me questions about the Aboriginal way of painting and I had all that knowledge in me,” he says.

The link between this knowledge and the Catholic faith is a subject that he addresses in his artwork.

“I see the Gumbaynggirr Dreamtime stories being very similar to stories from the Bible. If you look at them both – the creation myths – the Bible talks about God and we’ve got the Rainbow Serpent. We just have a different name and language to describe the same thing,” Richard says.

He describes his art as being contemporary with traditional Aboriginal elements. “I try and stick to my Aboriginal roots when painting but create my own style. You could call it contemporary. But above all it’s my art. It’s taken me a long time to get where I am.”

One of the major highlights of Richard’s career was having his artwork used for the marketing and merchandise for World Youth Day in 2008. At that time, Richard was the artist in residence at the Australian Museum, an experience he describes as “unforgettable”.

“I had thousands of people from all over the world come up to me during this time just to talk about my artwork,” he recalls.

Another highlight was having two of his works used during the canonisation ceremony for Saint Mary MacKillop at the Vatican in Rome in 2010. One of his latest projects to gain worldwide attention is the design of a trademark shoe for his nephew, pro-skateboarder Kieran Reilly. Featuring a striking artistic collaboration between Kieran, and his grandfather Bob Smith, the shoe has just been released through DC Shoes.

To find out where you can view Richard Campbell’s artwork and hear him talk, email Valerie Bryant [email protected]