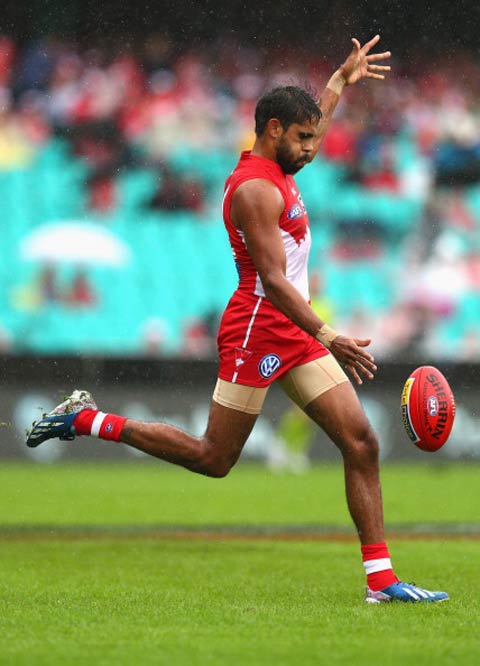 Can Sydney go back-to-back? Will Lewis Jetta reproduce his magical 2012 form? Can Buddy win a third Coleman Medal? And who will be the dark horses to provide the big surprises of the year? All will be revealed in another scintillating year of AFL footy.

Speedster Travis Varcoe was sorely missed by Geelong in 2012 as he sat out most of the season due to a stress fracture in his foot, but if his pre-season form playing in a new rebounding defender role is anything to go by, the 24 year old is all set for a big comeback in 2013. Speaking about his frustrating 2012, Travis says, “That’s the way footy goes. You’ve got two options: you can put your head in the sand and cry about it or just realise that’s the hand you’ve been dealt and get on with it.”

2013 may also prove to be a comeback year for Adelaide’s forgotten man, Richard Tambling.  A back injury to team mate Brenton Sanderson provided Richard with a golden opportunity to prove his worth to the Crows this season. Richard played only one game for the Crows in 2012, however, he showed consistent form at SANFL level (winning Sturt’s Best and Fairest), and will be desperate to make the most of any opportunities that should present themselves at senior level.

Another player seeking redemption in 2013 is Melbourne veteran Aaron Davey. Now 29, Aaron has played only 19 games in the past two seasons due to knee problems and form lapses, and he may well play a key role in the Demons’ reshaped forward line.

Danyle Pearce seems to have settled in perfectly at his new club, the Fremantle Dockers, with suggestions from the coaching group that he is the team’s best kick. The former Port Adelaide midfielder should find a role across half-back or on a wing, where he could release some of the attention paid to Stephen Hill .

West Coast fans will be glad to hear that goalsneak Josh Hill is looking forward to combining with Mark LeCras this year to create plenty of highlights. Josh booted 36 goals in 22 games for the Eagles last year, cementing his spot in the side and will be looking to improve on that return in 2013. “I feel a lot more comfortable now that I’ve got a year under my belt at the club,” said Josh. The Eagles have also added promising 22 year old Jamie Bennell  to the roster after selecting him in the rookie draft.

Cyril Rioli and Lance Franklin will once again be pivotal players in the Hawks’ quest for the flag. Only a hamstring injury prevented Lance from winning a third Coleman medal and Cyril earned his first All-Australian selection after averaging 15.7 disposals and booting a career-best 39 goals.  Look for talented wingman Bradley Hill to also improve on an impressive start to his AFL career. Brad has added some size in the off-season and played well in the NAB Cup. He shapes as a strong candidate for the NAB AFL Rising Star award.

What an incredible success story Lewis Jetta’s 2012 season was. After setting a club record of consecutive behinds for the Swans in 2011, in 2012 Lewis exploded to become Sydney’s X-Factor, mesmerising defenders and playing a crucial role in the Swans’ charge all the way to Grand Final glory, booting 45 goals along the way. Led by the experience and talents of Adam Goodes, who will be playing in his 15th AFL season, Sydney will be out to prove their premiership win was no flash in the pan.

In 2013, Carlton’s Jeff Garlett will be looking to bounce back after seeing his goal-kicking totals take a slide in the past two seasons. Jeff has been impressive in the pre-season and his fitness levels will enable him to push up the ground where the Blues are hoping he can become a Lewis Jetta-type player. Likewise, Chris Yarran has stood out in the Blues’ pre-season matches playing as an on-baller. New Carlton coach Mick Malthouse looks set to push the dashing play-maker into the midfield.

In spite of niggling injuries, North Melbourne’s Daniel Wells enjoyed an excellent 2012, however, injuries have prevented the 28 year old from enjoying an interrupted pre-season preparation for the new season. Daniel has plenty to play for this season as he becomes a free agent at year’s end. “I would love to be a one-club player,” Daniel told Super Footy, “I would love to see out my career with them (the Kangaroos). Hopefully I still have plenty of years, so I will just get out on the park and play good footy, and that will take care of itself.”