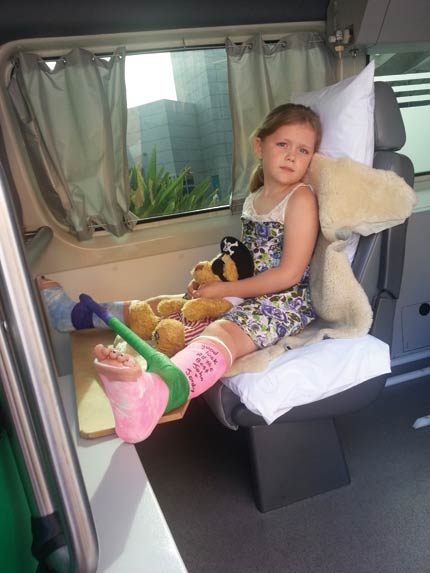 Sometimes just being a parent can be hard, but having a child with special needs can cause extra stress on a family. Accessing support services and assistance is not always straightforward and sometimes what you need most is someone to talk to, to help you get through each day.

Virginia Cole, of Hilltop, NSW, is a single parent to Emily, 8. Emily has Perthes’ Disease, a condition that affects the hip joints of children, usually between the ages of three and 11 years.

Normally, the top end of the thigh bone (femur) is shaped like a ball so that it can fit snugly into the hip socket. In Perthes’ Disease, this ball (femoral head) is softened and eventually damaged due to an inadequate blood supply to the bone cells. Around one in every 4,750 children is affected, with boys four times more likely to develop the disease than girls.

Virginia says Emily has been incapacitated by the disease for more than four months now. “Her mobility has been affected. She has gone to school in braces, then on crutches or in a wheelchair. There has been a steady decline in her mobility at school, and I am trying to get her to still want to go to school,” Virginia says.

“She has sat on the couch for a month because she can’t walk. She has such a strong character that has carried her through this. She is still smiling and happy after four weeks – it is a real test of character.

“Perthes’ Disease is more of a boys’ disease and it generally affects one hip. If it affects two hips in a girl it means the outcomes are not so good. Emily is in this category. We had a few problems because we had an early misdiagnosis. Now the hospital is doing all they can to help us.”

As a parent of a child with special needs, Virginia says the main problem she has encountered has been accessing support services.

“Accessing specialists if we have problems has been really difficult, but a bigger problem for me has been accessing support services,” she says.

“Also with the government changes for single parents, I now have to seek work because I have a child who is eight. I had to apply for a carer’s pension, which has restricted the time I can work, but I still have the added financial problems of having to get Emily to hospital.

“Emily will now have to go to rehabilitation. I finally have Home Care help now, but I only found out about this recently. I am independent, so the big problem was asking people for help. When you have a child with a disability… when they are diagnosed… no-one tells you ‘OK, you can apply for this and that’ – none of that information is available. I had to find it all out myself. As I have stumbled along, I have found out about things and services that can help.”

“The Marumali health service told me about Home Care. I could have had this six months ago. There is no booklet that says ‘OK, you are Aboriginal and your child has a disability – you can apply for this and that’. Marumali has also said they will help me pay for rehabilitation, so Emily can learn to walk again.”

The family has also recently moved from Adelong, near Tumut, to Hilltop to make it easier to access services, but there are still many pressures in commuting to specialist services and hospitals.

“This makes us closer to services, but the children had to make new friends and with Emily not being able to walk it’s made it a lot harder, too,” Virginia says.

“Hilltop is a relatively easy drive to Sydney, but when Emily had surgery at Westmead, I was away from my other daughter for a week. Clinics are ‘first-in, best-dressed’, so we try and get in early to beat the traffic.”

She says she has relied on the support of her mother and a friend to get by. “My mum and a really good friend have really helped me by taking my other daughter to school and keeping me motivated. Without that support, it would be so hard. You need someone to talk to if you are having a tough day or for respite,” she says.

“I work three days a week as a learning support officer at Campbelltown Performing Arts School. It is really challenging. Campbelltown is such a dynamic community and this job is putting things back on track for me and providing some balance. They are also flexible and you get school holidays off, which is a huge bonus. I used to work in Early Childhood as a pre-school teacher – that was all day and shiftwork and only four weeks off a year.”

Virginia says that all children with Perthes’ Disease eventually walk and that it just takes time. “There is light at the end of the tunnel. It is just a matter of taking each little step as we go along,” she says.