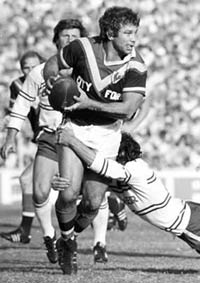 With the State of Origin series in full swing, we got to thinking about the most influential Indigenous players to have donned a maroon or sky blue jersey. Don’t agree with our list? Let us know who you think deserves to be there.

Artie set the tone for all Origin matches to follow after he captained/coached the inaugural Maroons team in 1980, leaving club mates like Mick Cronin seeing stars and creating the legend and ethos of Origin football in the process.

JT’s specially designed maroon headgear has become a symbol of QLD’s complete domination over NSW in recent times. Having been the most influential player during the Maroons’ five straight series wins, JT’s place in Origin history is assured.

Laurie is the Blues’ most lauded and successful captain, having led NSW to three consecutive Origin series victories between 1992 and 1994. Now if he could only get a chair on the sidelines.

There are a number of iconic images that encapsulate Origin football, and the footage of Gorden Tallis manhandling Brett Hodgson, dragging the Blues’ fullback across the field before flinging him into touch is right up there with the best. ‘Gordie’ typified QLD’s grit, passion and aggression like few others.

‘The Black Pearl’ was one of the most lethal attacking centres to have played Origin football; he played 11 games for Queensland between 1991 and 1998.