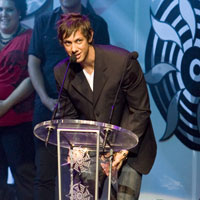 Winners of the 14th annual Aboriginal and Torres Strait Islander awards have been announced at a spectacular star-studded ceremony held at the Sydney Opera House on Thursday, October 9, 2008.

A who’s who of black Australia dazzled on the red carpet before joining hundreds of excited audience members in the Concert Hall for a celebration of Indigenous excellence in music, sport, entertainment and community achievement.

Hosted by AFI award-winning actor Luke Carroll, the Deadlys 2008 was an unforgettable night of entertainment featuring the angelic voice of internationally acclaimed singer/songwriter Gurrumul Yunupingu. Also wowing the crowds with their vocals were the captivating Jessica Mauboy and the glamorous Ursula Yovich, while the legendary Jimmy Little also showed Australia he’s still got it with an impressive performance of his original hit, Royal Telephone.

But Deadlys night is all about the winners, and this year saw some of the most accomplished award winners yet seen on a Deadlys stage.