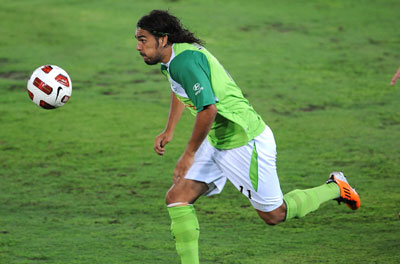 David Williams, the North Queensland Fury’s exciting young striker is heading south, for the time being at least, after signing a six month contract with Sydney FC.

The talented 23 year-old joined the Fury from Danish club Brondby FC in 2008 and has enjoyed two stand-out seasons in Townsville, finishing the current A League season as the clubs leading goal scorer.

He joins Sydney on a six month loan contract to help bolster the Sky Blues in their Asian Cup campaign. While still loyal to The Fury, should the North Queensland club fold in the near future as is speculated, Sydney would look to secure the young strikers services on a permanent deal.

We are extremely happy David will be joining us for our AFC Champions League campaign,” Sydney FC vice-chairman Scott Barlow said in a statement.

“He is a fantastic player and shows immense passion on the pitch and that is a key attribute we look for when bringing players to our club.

“He will add significant potency to our attack and we know Asian football is very fast paced and this style of play will suit David.”

With the Fury missing out on a finals appearance this season having finished last on the ladder, Williams says he is looking forward to the challenge of playing in the AFC Asians Cup and staying match fit over winter.

“All footballers playing in the A-League aspire to play in the AFC Champions League and I’d like to thank both (Fury chief executive) Rabieh Krayem and (Head of Football Operations) Robbie Middleby for being so supportive in making this deal possible.

“Although I’ll be wearing the sky blue of Sydney, I’ll definitely be representing two teams in Asia.”