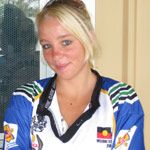 Most people wouldn’t associate playing footy with childcare, but for Wellington High School student Amber Knight, finding her confidence on the field through the National Aboriginal Sporting Chance Academy, has given her the confidence to go after her dream job.

A talented tennis and football player, Amber joined the National Aboriginal Sporting Chance Academy (NASCA) in Dubbo. She says it has helped boost not only her confidence in sport, but also her performance in the classroom.

“The Academy keeps me coming to school,” says Amber. “It also helps me meet new people and make new friends.”

As a result of her regular school attendance, Amber is now the top student in her maths class and is on track for achieving her goal of finding a career where she can give back to her community.

“I would love to continue with my footy, but after school I’m hoping to work in childcare because I would like a job where I can work with kids,” she says.

Amber, who is in Year 11, says getting involved in the Sporting Chance Program has inspired her to give her all, not only to her sport, but also to her schoolwork.

When she’s not blitzing her schoolwork, Amber says she still has plenty of time to give her team-mates a run for their money out on the footy field: “I really like mixed football and keeping up with the boys. I think they think it’s pretty cool!”

To find out more about NASCA, visit www.nasca.com.au