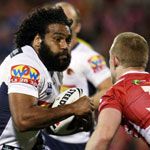 The Official lineup to take on the NRL All Stars at Skilled Park on the Gold Coast in February is:

After nearly two months of voting, fans have selected an outstanding looking team that features four players from the recent Kangaroo tour.

“The fans have picked an incredible team,” said NRL CEO David Gallop at the announcement of the lineup.

”There is going to be a huge sense of anticipation building around who is selected in the NRL All Stars team.

”There is no doubt that this will be a spectacular start to season 2010.”

More than 16,000 tickets have already been sold for the clash.