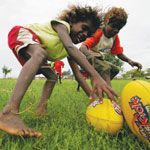 The Minister for Education, Julia Gillard, today announced the Government’s contribution of $6.75 million toward the establishment of the Australian Institute for Indigenous Learning and Skills Development.

The institute will form part of the redeveloped Punt Road Oval, the original home of the Richmond Tigers, which will be completed in 2010.

Both classroom and other facilities – including lecture theatres, tutorial rooms, conference and sporting facilities – available at the redeveloped oval will be used for training.

Vocational education and training options will be offered to develop skills that provide the best opportunity to improve employment prospects.

“I know this is going to be a genuine delight not only for those who barrack for Richmond but anyone who cares about the future of Indigenous Australians,” Minister Gillard said at the launch. “This will be an environment in which Indigenous kids feel comfortable.