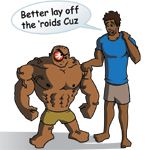 Don’t cheat yourself short on the roids

You’re hitting the gym, eating the right foods, getting plenty of rest and you’re still not as big as the other fellas. Then someone offers you a bottle of magic pills . . .

More of our fellas than ever are finding their way into the top ranks of our national football codes and looking pretty fit with it too. Aside from their natural talents, they achieve results through hard work and determination.

The professional footballer’s physique has changed dramatically thanks to advances in sports sciences, combining strength training and aerobic exercise, the right diet and officially approved supplements. Plus increases in players’ salaries mean they can concentrate
on their training and development without having to worry
about a second job.

Compared to other countries, Australia’s elite athletes have a relatively clean record when it comes to the use of performance-enhancing illegal substances, such as steroids. Perhaps that’s because of our strong sense of fair play as steroid use is considered cheating. It is not on a level playing field with everyone else’s natural talents and hard-working athletes don’t like it.

There are also risks of permanent and life-threatening damage from steroid abuse.

The word on the streets

That’s not to say that steroids, sometimes known on the streets as roids, juice or gear, are not illegally available, or used and abused through networks in cities and towns across the country.

Aside from athletes desperate for success, users of steroids are mainly interested in changing their physical appearance by increasing muscle mass. These include amateur and competitive bodybuilders, security guards, bouncers and teenage and young adult males who want to be bigger.

Taken to extremes, this desire to be bigger can result in body image distortions similar to conditions such as anorexia, but at the other end of the scale.

That is, guys who can barely fit through a doorway think they are just not big enough. It’s called body dysmorphia. Men with this condition think that they look small and weak, even if they are large and muscular.

This is where steroid abuse can become an issue.

Testosterone promotes the masculine traits that fellas develop during puberty, such as development of male characteristics including body and facial hair, muscle growth and strength, and a deep voice. Normal levels of testosterone also influence the production of sperm, and promote sexual function and sex drive.

Anabolic steroids are an artificial form of testosterone and in small, controlled doses, they are helpful medically. Approved medical uses include treatment for swelling and promoting healing from injuries, as well as treating chronic muscle, bone and blood damage caused by disease and ageing.

Steroids are illegal to obtain, sell and use unless under medical supervision. While steroids can increase muscle size and stamina when taken in conjunction with a body strengthening and nutrition program, they have been linked to the risk of serious side effects.

Doses taken by abusers to get the results they think they want can be between 10 to 100 times greater than doses used for treating medical conditions. That’s a greater risk of serious side effects, too. Different drugs cause different side effects at different doses in different people, which means you can’t really be sure what’s going to happen.

There are some suggestions that steroids can become addictive. That is, some people ignore the negative side effects because they believe the results outweigh other impacts on their health and wallet.

The downside of growth

The side effects are particularly risky, and permanent, for teenage boys and fellas in their early twenties, one of the most vulnerable groups to experiment with steroids to grow bigger.

Generally, teenage boys develop visible signs of maturity slower than girls and at different rates to one another. Everyone’s body is different. The important factor is that there is a delicate but powerful balance of natural hormones, including the body’s own supply of testosterone, affecting development through this period.

Teens and steroids don’t mix because the use of anabolic steroids in teens affects bone development and growth. They are programmed to continue growing until the level of testosterone in the body reaches a certain level.

Of all the debate about the positives and negatives of anabolic steroids, stunted growth in teenagers is universally mentioned.

The male body can keep growing until age 20 and the high level of testosterone production in men continues until at least age 25, with very minimal drop recorded in most cases until at least 35 years of age.

So taking anabolic steroids is not just cheating on nature, it will inhibit your normal development and may have severe and permanent effects on some of your body’s major organs (see box).

There are other undesirable effects. Increased and often undesirable aggression is another symptom commonly linked to abuse of steroids. Some side effects can even affect those taking medically prescribed steroids, but the difference here is they are under medical supervision with regular blood level checks.

So if you want to build stronger muscles for sports or to improve your appearance, there is only one way to do it and that’s through a consistent program of exercise, nutrition and rest. If you don’t want to be exposed to the risks, including organ damage and shortened lifespan, don’t take the drugs.

Initial effects of anabolic steroids can include:

Steroid use has also been linked to:

There are also suggestions steroids can enlarge some of the body’s organs, which can lead to heart attacks and strokes, even in the young, and liver and kidney failure and disease.

Oral steroids have a greater impact on the liver and kidneys, which are involved in filtering and distributing substances through the body. For injecting steroid users there is the risk of sharing needles, which can lead to HIV/AIDS and Hepatitis B and C.

Because they are illegal, they are expensive.

Because they are illegal, it is difficult to be certain of what you are getting.

Masking agents or drugs to counter some of the visible side effects also add to the cost and they may not work.