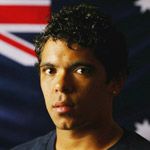 How long have you played soccer for?

I’ve been playing soccer since I was five, which makes it 20 years. Even when I was playing AFL with Central District in SA I was involved in soccer in some capacity.

How did you get involved in football?

I always wanted to be like my brother Raymond, so I followed him down to the local club and started my career as a spritely five-year-old with Brahma Lodge Soccer Club.

It’s the world game; if you’re dedicated you can travel and achieve success worldwide while competing against the best on the globe.

My strengths are my ability to read the play and create something from nothing.

Why do you think you made North Queensland Fury?

As a brand new club, they wanted that X Factor in a player and they feel they’ve found that in me.

A 10-15 minute warm-up followed by skill sessions and small games of 5 on 2, and a few passing drills. Closer to games we do game-simulation drills, which mirror how we want to play. Earlier in the week, we split into three full teams and play full-pitch practice matches in a round robin format. We end each session with a full warm-down to prevent injury and soreness.

Skills training and small games because I get to practise my ball-handling skills and tricks. Weight sessions are my least favourite… don’t tell my coach!

Generally I just try and eat healthily. An average day starts with a bowl of muesli. I train twice a day, so after each session I always have a couple pieces of fruit and drink plenty of water. For snacks, I stick to smoothies. Lunch is always a salad roll or pasta, and for dinner I stick to red meat or chicken and as many vegies as I can fit in.

YES! If I’m feeling stuffed after training and too lazy to cook I sneak down to Subway. We’re told it’s not bad for you if you have lean meat and stick to a six-inch sub. But I try to sneak in a chicken fillet when no one’s with me… again, shhhh to the coach…

It’s pretty simple, if you’re serious about making something of your life or being an elite sports person you just have to stay away from that stuff. In my current contract I’m not allowed to drink alcohol in the four days leading up to our games or I face a fine and suspension. It doesn’t faze me because I keep my eye on my goals and stay away from it altogether.

Eat right, take care of your body and mind because you only get one chance at life and in sport it can be over before it started if you’re not prepared. Anything is possible if you’re in the best condition. Be a leader not a follower!