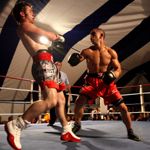 Aboriginal boxing made a triumphant return to Redfern with the first Night of the Black Stars.

Despite torrential rain, the “House Full” sign went up and latecomers were turned away as a sellout crowd of more than 800 people crammed into the bigtop at The Block on Black Friday, the anniversary of the national apology to the Stolen Generations.

The Aboriginal fighters won five out of the seven fights on the night.

In the professionals, Joey Williams showed heart and power to overcome spirited kickboxer Adam King on points. Click the video below to watch highlights of the bout.

Glebe’s Edgar “Brown Sugar” Wymarra showed his impressive array of skills that had the crowd on their feet. He defeated tough Filipino Jurland Ceniza over six action packed rounds by unanimous decision.

“Cool” Willie Kickett was unable to fight on the night due to a chest infection.

Alex Wymarra, Head of the Indigenous Sports Academy was thrilled with the night and the turnout.

“The rain was pouring in, the lights gave us trouble but we brought Aboriginal boxing back to the Block in a big way,” said Alex.

“We had to turn people away and those that were inside were treated to seven fantastic fights featuring our warriors, some with heart, some with skill, some with both. The room was pumping with Aboriginal pride and what a way to celebrate the anniversary of the apology by bringing legends and future legends together for a night of Koori style tent boxing.”