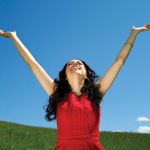 What is happiness? And how do you get it?

We all want to be happy in our lives, but how do we go about achieving it? According to research, it’s got less to do with fame and fortune and a lot more to do with things much closer to home.

The word “happiness” encompasses a huge variety of positive feelings including cheerfulness, optimism and joy.

According to Professor Gordon Parker, Executive Director of the Black Dog Institute, psychologists find it useful to distinguish between what he calls a “hedonic” and a “eudemonic” state.

A hedonic state is a short-lived state of pleasure while a eudemonic state is one associated with ongoing wellbeing, engagement in relationships and contentment.

Professor Parker says that some of his findings from the research he had studied showed: