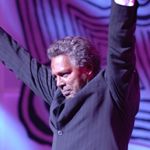 The evolution of the Deadlys has been a fascinating one to watch. Each year the event has reached new heights and, true to form, the Deadlys hit a new high in 2006.

This year’s event saw a record number of votes, record attendance and a record number of Northern Territorian winners, and a rapturous crowd made their delight known as the now-iconic triangular Deadlys trophies were handed out along with the much sought-after ruby and gold Deadlys ring.

From the haunting call of the didj that welcomed all to Gadigal country to the spine-tingling finale, the 12th Deadlys delivered a powerful and decisive message – Aboriginal and Torres Strait Islander Australia is here, and we are stronger and more successful than ever.

The standard of the performances have never been higher. The award-winning Pigram Brothers kicked off the show with Moonlight before Legendary Koori rocker Bobby McLeod whipped the crowd into a frenzy with his hit Frogs Don’t Cry, sporting a jacket bearing a sparkling Aboriginal flag.

The lovely Cindy Drummond almost stole the show with her rendition of Ruby Red Lips; accompanied by some truly seductive dancers, while Mrs Coral Henderson and Mrs Beryl Myers of the Bigotbri Concerned Women’s Association (aka Tess Allas and Lina Kastoumis) had people rolling in the aisles with their cheeky parody of rural white Australia.

But the reason why all were in attendance was to honour Indigenous achievement, and as award-winners were announced by a procession of celebrities, the audience voiced their approval time and time again. Pride in true Aboriginal and Torres Strait Islander identity was evident, especially when Ten Canoes star Jamie Gulpilil and co-director Peter Djiggir accepted their awards in Ganalbingu language – reminding all in attendance of the importance of celebrating and maintaining our diverse cultures.

The show reached its climax with a finale that had the collective hairs on the back of the audience’s neck standing on end. The Song of Survival had it all – celebrity singers, powerful music, traditional and contemporary dance, and a massive choir. It was a moving and empowering performance that was over all too soon.

For the third year running, Deadlys host Ernie Dingo was on fire, keeping the audience in stitches from the very outset, while also managing to make some truly poignant statements that gave all pause for thought. As he made his closing address he reminded us all of what it means to be an Indigenous Australian in 2006.

“Our mob’s been through some tough times over the past 200 odd years,” he said. “But we’ve stuck together and we’ve survived. And it’s that spirit of survival that makes us who we are.”