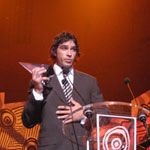 2006 has been a year to remember for this league superstar.

For Johnathan Thurston, the past 12 months has been one hell of a ride. An d t o top it all off, the Cowboys star now has a gleaming Deadly Awar d t o place next to his Dally M on the mantelpiece.

While the Cowboys disappointingly missed out on this year’s NRL finals and Johnathan’s own season was cut short with injury, he still had plenty to smile about in 2006. He represented Australia against the Kiwis, helped steer the Maroons to a State of Origin victory against NSW, has been touted as Andrew Johns’ replacement and was named a finalist in the Cleo Bachelor of the Year competition. Winning the Deadly award for Outstanding Achievement in Rugby League was some sweet icing on a very tasty cake.

It was Johnathan’s first-ever Deadlys, and he was one of the major stars on hand at this year’s ceremony. After presenting an award with fellow Queenslander Leah Purcell, (making sure to rub some salt into the Blues’ State of Origin wounds along the way), Johnathan received a massive reception when he retune d t o the stage to accept his award.

Coming up against some notable competition in fellow Indigenous stars Greg Inglis, Nathan Merritt and Sam Thaiday, Johnathan was a deserved winner.

In a moving acceptance speech, Johnathan dedicate d t he win to his Grandmother, who passed away earlier in year.