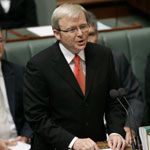 Surrounded by children from his community, Galarrwuy Yunupingu today handed Prime Minister Kevin Rudd a petition on behalf of 13 of Arnhem Lands’s most senior traditional men calling for their “self-evident” rights to be recognised in the Constitution.

In Arnhem Land for a historic cabinet meeting, Mr Rudd said the Government would “give attention to detailed, sensitive consultation with indigenous communities about the most appropriate form and timing of constitutional recognition”.

The petition was given to the Prime Minister at the very same sport that Yolngu elders handed over a famous bark petition calling for land right 40 years ago in the community of Yirkalla.

“This is the beginning of the future of these little ones,” Mr Yunupingu said.

A former Australian of the Year and one of Arnhem Land’s most powerful men, Yunupingu said Indigenous rights were “self-evident”.

“These rights are fundamental to our place within the Australian nation,” Mr Yunupingu said.

While Labor’s has supported a constitutional recognition of indigenous people well before last years election, Mr Rudd has remained coy about when the Government would begin an official process to achieve it.

Mr Rudd said the Government remained focused on practical reconciliation and closing the gap in disadvantage between white and black Australians.

“While our priority now remains this practical challenge of closing the gap, we will also give attention to detailed, sensitive consultation with indigenous communities about the most appropriate form and timing of constitutional recognition,” Mr Rudd said.