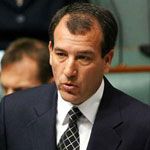 Accusations the NT Government annually misspends hundreds of millions of dollars meant for remote and regional Aboriginal communities, on Darwin centric projects, has been denied by Territory Treasurer Delia Lawrie.

Brough has explained that the NT Government has a moral obligation to spend Government grants on Aboriginal people, despite their being no legal requirement to do so.

Brough also added that he had asked for an independent assessment while he was minister, but there has been an internal review conducted instead.

Mr Brough is the architect of the emergency intervention into Aboriginal communities, which involves voluntary health checks for Aboriginal children and the quarantining of welfare payments in many of the 72 ‘prescribed communities’ in the Top End.

It was recently revealed that policy decisions pertaining to the radical, army-backed intervention were brought together by Brough and former Prime Minister John Howard in little over 48 hours prior to its announcement.

“Do the voters of the Northern Territory agree that it’s a suitable situation to have people living in the conditions that they are when there’s money to be spent there and there’s not schools or classrooms or there’s not health services or appropriate sanitary services?” the former Minister told the ABC.