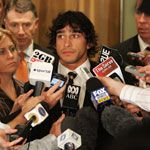 Thurston’s comments come in the wake Penrith prop Petero Civoniceva reacting to racial abuse from a group of Parramatta fans during his clubs clash with the Eels at Parramatta stadium.

One of the fans has since been handed a five year ban from attending any NRL match, Thurston however believes this punishment will not be enough to deter racist fans.

“When you’re playing you don’t deserve to hear that,I think the league could do more certainly, as an indigenous person I certainly want them to stamp that crap out of our game. I’m sure there are ways of not tolerating it,” said Thurston.

Thurston also revealed how in 2006 he and former Cowboys teammate Matt Sing where targeted by Eels fans with racial taunts and lodged an official complaint with the club and NRL.

Thurston described the abuse as a “low act” and argued that the NRL should have issued a life ban.

“They should be banned forever,” Thurston said. “I don’t think it’s tolerated in society – and it shouldn’t be tolerated in footy, either.

“The person involved admitted he made the statement and apologised,” Gallop said.

“In those circumstances, we felt five years was appropriate, but if he breaches it he is liable to be prosecuted and face a lifetime ban.”