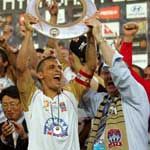 Recent months have seen both Jade North and Travis Dodd starring on the international stage.

The A-League season may be done and dusted, but that doesn’t mean the action has ended for our two top Indigenous soccer stars.

Capping a whirlwind month in which he became the first Indigenous footballer to captain a side to a Grand Final victory, Newcastle Jets defender Jade North headed to China with the Socceroos for their crucial World Cup qualification match against one of Asia’s strongest national teams. He also became the first Indigenous person to captain the Socceroos when he led the side out in a trial match against Singapore.

Only a few weeks earlier, Jade reached the pinnacle of a highly successful Australian career in which he has played in several Grand Finals with both Sydney Olympic and Perth Glory. No doubt it was the experience of those matches which came to the fore when the Jets faced local rivals the Central Coast Mariners in the recent Grand Final – the Jets went on to claim their first A-League title with a 1-0 win.

As the A-League season came to a close, the focus of the Australia footballing public returned to the all-important World Cup qualifying matches. Jade has been a cusp Socceroo for several seasons now and so it was no real surprise when he was called up by coach Pim Verbeek to head to China after such a standout year.

Despite the fact he was playing at extreme altitude in Kunming (the capital of the Yunnan Province in south west China), Jade showed no signs of the long and fatiguing domestic season and was easily Australia’s best defender during the match. He shut down several dangerous situations, helping the Socceroos to secure a crucial 0-0 draw which pushed them to a handy four point lead at the top of their group and on track for a berth at the 2010 World Cup in South Africa.

Jade was one of just two A-League plays to take part in the fixture, and he drew praise from his coach, who has previously criticised the quality of A-League players and was otherwise cautious to single out any one player in what he described as a “good team performance”.

“I had to mention Jade North because he was the most inexperienced player if you look through the rest of the team,” Pim told the waiting media pack at Sydney Airport upon the team’s return.

“He had a great performance. I think it’s especially good for him to play with (Socceroo captain) Lucas Neill, I was very pleased with him.”

The performance will also be sure to set Jade directly in the sights of some international clubs which may just bring him closer to an overseas move in the near future.

Meanwhile, in the Asian Champions League (ACL), the A-League’s other Indigenous star Travis Dodd set a unique record of his own.

While they may have come off a disappointing 2007-08 season, Adelaide United have been one of the most consistent and successful teams over the A-League’s three-year history, warranting their selection in this year’s Champions League after losing to Melbourne in the 2006-07 Grand Final.

Travis was again one of Adelaide’s strike players during the season and has carried on his good form into the ACL.

Playing against Vietnamese club Dom Tan Long An in the final group stage match, Travis scored two first half goals followed by a third early in the second half to send Adelaide hurtling into the next round with plenty of momentum. The club now have their sights set on becoming the first Australia team to progress to the quarter final stage of the competition, a feat which would chalk up yet another first for Travis.

Watch out for Jade to appear in the green and gold once again when the Socceroos suit up for their next qualifier against Iraq on June 2.

Meanwhile, Adelaide United face Vietnamese club Becamex Binh Duong in the next stage of the ACL on April 23 at Hindmarsh Stadium in Adelaide.