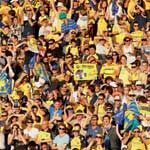 Good fan vs. bad fan – which one are you?

Following a football team and cheering them on at the game can be great fun, and watching a game with your mates or your family can be a great way to spend some quality time together. Not much beats that swelling feeling of pride when your team scores a try or wins a match. A good fan also cheers their team when they lose, and can gracefully congratulate the winning side and their fans.

But sometimes a good fan can turn into a bad fan. Some examples of being a bad fan include shouting abuse at the opposing team’s players, abusing the referee, picking fights with other fans in the crowd, or throwing dangerous items onto the ground. This is sometimes referred to as “sport rage”.

Bad fans ruin everyone else’s enjoyment of the game, and can cause injury to themselves, to other spectators and even to players. It can also deter young people from wanting to play and adults from wanting to volunteer their time as coaches or officials, and damages the reputation of the team and their club.

Bad fans can even end up in trouble with the law, like the Victorian father of two who managed to get both his sons banned from their junior football club and faced criminal charges after continually attacking and abusing fellow spectators and encouraging his sons to hit other players.

Football is a great game – to play and to watch. And while it’s great to win, the most important thing should be the game, and the spirit in which it’s played.