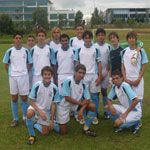 Named in honour of the first Indigenous Socceroo and member of the 1974 World Cup squad, the recent Harry Williams Cup drew together some of the top Indigenous footballing talent from across New South Wales.

Held this year between April 14 – 17, the cup is designed to offer Indigenous footballers the chance to be developed and identified for future representative opportunities, and is one part of Football NSW’s Indigenous Development Pathway which also includes regional and metro clinics and the Indigenous representative team known as the Football NSW Geckos.

Indigenous players were selected to participate during a round of clinics while the cup itself consisted of training sessions to develop skills, followed by a gala day at Valentine Park in Glenwood where Indigenous squads competed against local school and club teams.

With age groups spanning from Under 12, 14 and 16 boys, to under 14 and 16 girls, the fact teams had only one week to prepare and yet all produced such fine displays was testament to the abilities of the players selected.

Harry Williams was in attendance throughout the day, joined by Sydney FC stars Brendan Renaud and Robbie Middleby who were on hand to provide mentorship and advice to the young players.

“This Cup provides a terrific platform for any interested Indigenous player both male and female in furthering their careers as footballers.

“Football NSW have done a tremendous job in keeping the Cup alive as I have seen the tournament progress in more ways than one since its introduction a few years ago,” said Harry Williams.

One of the highlights of the cup was the Under 16 boys final between the Indigenous team and Fairfield Hostspur that ended 0 – 0 in regulation time. Led by former NSL defender Claudio Canosa, the Indigenous team (who had only trained together for three days) went on to win in a penalty shootout after going undefeated throughout the tournament.

The two Indigenous players to be awarded Sydney FC School Holiday Scholarships were Zenton Cook of the Under 16 Boys team and Danielle Francis of the Under 14 Girls team. Congratulations to both players on their individual success.