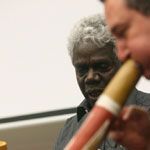 Catch a rare glimpse of the cultural heartland of northern Australia when Indigenous music experts from the University of Sydney perform the traditional music from northern Australia at the Macleay Museum at 2pm on Sunday, 30 March, 2008.

Dr Joseph Neparrna Gumbula, an eminent Yolgnu elder and Australian Research Council Indigenous Research Fellow at the University of Sydney will perform “Manikay” ” beautifully melodic song traditions from Arnhem Land ” with Dr Aaron Corn, Research Fellow in Ethnomusicology at the University. They will then be joined by Allan Marett, Professor of Ethnomusicology at Charles Darwin University and author of Song, Dreamings and Ghosts, who will accompany Joe Gumbula singing mesmerising “Wangga” ” the traditional musical genre of the Daly region in north-west Australia.

For the past year, Dr Gumbula and Dr Corn have been unearthing stories, photographs and songs recorded in Arnhem Land by early anthropologists and the two scholars will present some of their findings during this event. The pair is working towards supporting the survival of Australia’s traditional Indigenous heritage. This rare event is held in conjunction with the Macleay Museum’s latest exhibition, People, Power, Politics: The First Generation of the Anthropologists at the University of Sydney.

* Please note this event replaces our previously advertised Papua New Guinean performance that was due to occur on Sunday, 30 March, 2008.