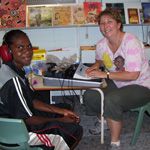 How big an issue is hearing health in Central Australia?

Rebecca: Well I can probably say that at any given time if you were to walk into a classroom of primary school aged kids you could guarantee about 85% of those children in the classroom have some kind of hearing loss, and also you can almost guarantee that a baby who is about four weeks-old has had its first episode of otitis media – so its pretty huge.

What are the consequences/effects of poor hearing?

Rebecca: Well it starts from birth so of course kids can’t learn English. Out here in Central Australia, English is usually a third or fourth language so they have problems learning English and of course their own language and then when they get to school they can’t listen properly in the classroom which leads to behaviour problems and then they think “˜well, why bother going to school if I cant hear and I keep getting in trouble’? And then into adulthood, it becomes very hard trying to get a job because they have the ongoing ear problems which can lead to other problems. So it’s a huge consequence from birth to adulthood and it doesn’t just affect the ears and hearing but it also affects the whole psychological wellbeing of the person.

How is your organisation going about addressing this health issue?

Rebecca: Australia Hearing has a program called AHFPIA which is Australia wide and we’re very fortunate that the organisation has made Indigenous health its top priority so everybody’s involved and the slogan is “˜Indigenous health is everyone’s business.’ So everyone in Australia is involved in focusing on this area. We are such a small centre in Alice Springs, there’s myself as a full time audiologist and another part-time worker, but we cover the whole of Central Australia as well as WA and parts of South Australia. We actually have people that fly in from other places and they adopt a community, so they make a commitment to a particular community three times a year for a minimum of two years just so they can develop a repour. So that’s the way Australian Hearing is doing it.

How often do you visit surrounding communities?

Rebecca: Unfortunately we can’t visit every single community. Here in the Northern Territory we’ve got an organisation called the Northern Territory Hearing Service which is a Territory Government organisation and their major role is primary and diagnostic testing, so we travel with them in Central Australia. They do all they diagnostic testing and then for the people that need assistance either by a hearing aid or other device we go ahead and organise that for them. So we don’t actually go to every single community but just as an example at the moment we’ve got people in South Austria and this is my third week out in a row, so usually every week there’s a trip happening to a community in Central Australia.

What are the major messages concerning hearing health that you are giving to communities?

Rebecca: I guess one of the biggest things for the young Mums and the kids themselves is to make sure their ears are clean, if they get a bit runny with some discharge then we make sure they know how to do tissue spearing properly and really encourage hand washing and nose blowing because these bug are transmitted very easily. So it’s really important they wash their hands. We talk a lot about good health, good eating, good nutrition that sort of thing, we don’t really know what causes the problem, all we know is that it is a huge problem and factors like over-crowding, nutrition, hygiene are all part of it so we try to give those message as well.

What are the big challenges?

Rebecca: Because you can only get out there three times a year, and they do have a lot of other people visit and we all have our priorities, I guess trying to work as a team with other agencies is one challenge. It is important that we make sure that we are all supporting each other in getting the whole message across about the whole person and not just about one aspect of health. I guess the message is getting across because I can see improvement, not so much in the incidence but in the awareness. The awareness is growing and that has been a long process. As for seeing a reduction in the incidence of infection, until we can work out why, that is the biggest challenge because people want to know there is a difference being made by reducing the number of ear infections but it’s not going to happen in the immediate future.

What are the keys to improving hearing health in Indigenous communities in your area?

Rebecca: I’d like to see a lot more research done on the actual bacteria that causes the infections but unfortunately it seems to change its form so when antibiotics are given they are not working properly anymore. I would like to see a bigger push toward going back to bush medicine and bush tucker, I think that’s really important and their are a lot of people out here that have amazing information and I think we need to be utilising that.