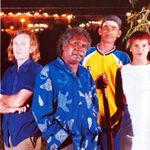 Yothu Yindi is the contemporary cultural voice of the Yolngu community in north-eastern Arnhem Land. The band members are drawn from two of the 20 clan groups in the region, the Gumatj and Rirratjingu.

The band formed in 1986, determined to promote the strength of the Yolngu people, presenting non-Indigenous people throughout the world with the opportunity to appreciate and enjoy aspects of their ancient culture.

Yothu Yindi recorded their first album, Homeland Movement, in 1988, a combination of contemporary Western rock and traditional Aboriginal song cycles. They also performed at the Seoul Cultural Olympics in Korea and toured the US and Canada with Midnight Oil. Homeland Movement was released in 1989 and has subsequently gone Gold, selling well over 50,000 copies.

In that year, founding member and singer/songwriter Mandawuy Yunupingu was appointed principal of the Yirrkala Community School after gaining a Bachelor of Arts in Education. While this limited the band’s touring capabilities, Yothu Yindi managed to perform in Hong Kong and Papua New Guinea and toured with Neil Young during the school holidays.

The following year, Yothu Yindi toured New Zealand with Tracy Chapman and performed at the Edinburgh Fringe Festival and the European Folk Festival in Glasgow.

Releasing their second album Tribal Voice in 1991, Yothu Yindi secured their place in Australian music history. The album dominated the music charts for most of 1991 and 1992, with singles “Treaty” and “Djapana” winning the band recognition right around the world. “Treaty” alone spent a mammoth 22 weeks in the national charts.

Yothu Yindi are the first predominantly Aboriginal band to have generated international recording and touring opportunities. They took “Treaty” to New York, which led to the securing of a recording contract with Hollywood Records. The track was subsequently voted Song of the Year by the APRA (Australian Performing Rights Association). Tribal Voice was voted Best Australian Record, and “Treaty” Best Australian Single and Best Australian Video at the ARIA Awards in Australia and the MTV Awards in Los Angeles.

Mandawuy took leave from the Yirrkala School in 1992 to concentrate on touring throughout Australia, North America and Europe.

In 1993, Mandawuy was named Australian of the Year in recognition of his commitment to forging a greater understanding between Indigenous and non-Indigenous Australians. At the ARIAs that year, the band continued to win awards with their second hit single “Djapana”.

That year, Yothu Yindi joined with the National Drug Offensive in launching a campaign aimed at encouraging the sensible use (rather than abuse) of alcohol in both Indigenous and non-Indigenous communities.

As if that wasn’t enough, they also released their third album Freedom, which featured the singles “World Turning”, “Timeless Land” and “Dots On The Shells”. Understandably, the band spent most of the following year touring Australia, Papua New Guinea, New Zealand, Germany, France, Belgium, Holland, the UK, North America and Japan.

1995 saw Yothu Yindi cutting their fourth album, Wild Honey (Birrkuta), in Australia and the UK, which they released the following year amid tours of Germany, Australia and North America.

In 1997 the band performed in South Africa for the first time, as well as embarking on tours of Europe and Brazil.

Yothu Yindi recorded their fifth album, One Blood, in 1998 in both Dublin and Bavaria, before touring Germany as part of rock star Peter Maffay’s Encounters tour. 1999 saw the release of One Blood, with special guests Liam O’Maonlai of Hothouse Flowers and Jim Kerr of Simple Minds.

Yothu Yindi took part in three hugely important gigs in 2000. In August the band was invited by the president of the National Council of East Timorese Resistance, Xanana Gusmao, to play in Dili as part of the first anniversary celebrations of the historic popular consultation on independence. In October, they performed “Treaty” to a global audience of billions at the closing ceremony of the Sydney 2000 Olympic Games. And later on in the same month, they performed at the opening ceremony of the Paralympic Games.

In between all of this, Yothu Yindi were recording their sixth album, Garma, at the new Yirrnga studio in north-eastern Arnhem Land and in Sydney. The album was launched at the Yothu Yindi Foundation’s second annual Garma Festival of Traditional Culture at Gulkula on the Gove Peninsula in early September.