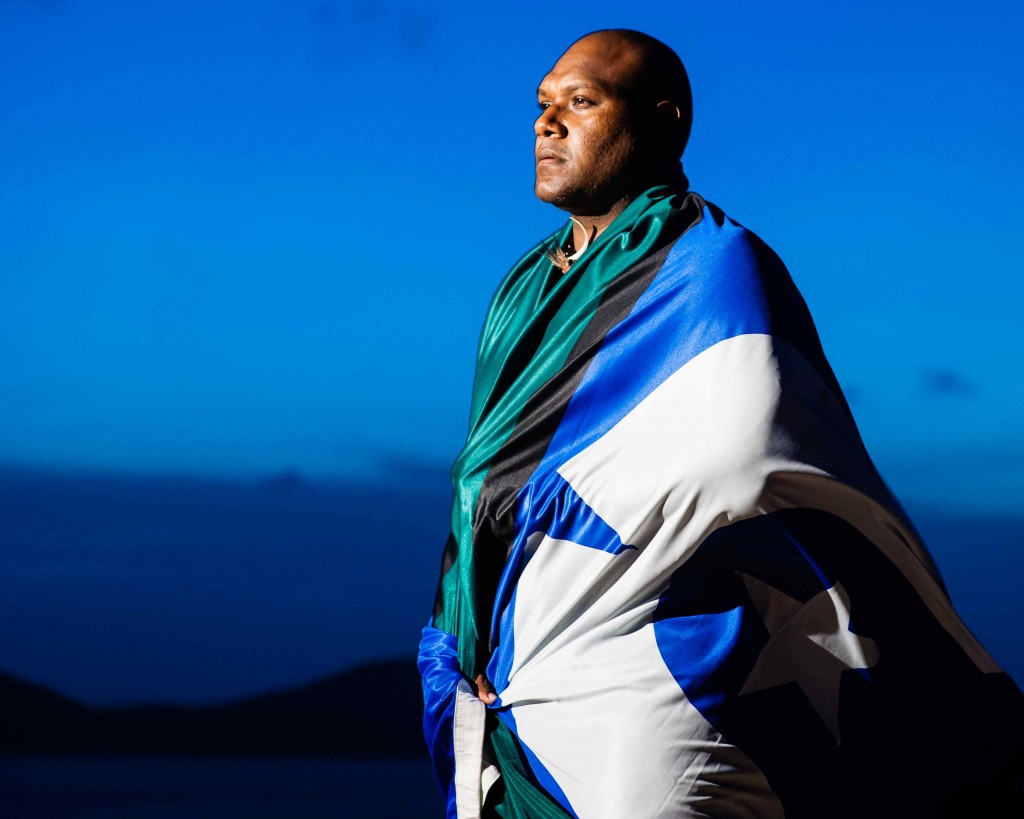 No artist on the local hip-hop front has flown the Torres Strait Island flag as prolifically as Mau Power (AKA Patrick James Mau). With seven mix tapes to his name, his own hip-hop collective and label (One Blood Hidden Image) as well as numerous Deadly Award nominations, the 31-year-old MC shares with Deadly Vibe the genesis of his new album, ‘The Show Will Go On’. Two years in the making, the concept album is a reflection of Mau Power’s maturation into fatherhood, his recent experiences and the next chapter of his ongoing journey.

Deadly Vibe: ‘The Show Will Go On’… what’s behind the title?

Mau Power: It has to do with the concept for the whole album, which is telling a story of survival and understanding of culture – of hip-hop culture, as well as my traditional culture. How storytelling and sharing of knowledge keeps culture alive through the generations, and how the methods of survival and storytelling through hip hop and traditional storytelling have similarities – this is why they marry up really well. So the title is saying this is how it’s maintained, this is how it’s passed on. There’s also the individual journey. It captures a particular point in my journey, where I was going through extreme changes and finding my direction and identity of who I am.

The extreme changes Mau Power is talking about include the birth of his two daughters – a life-changing experience that impacted on his writing and music.

DV: So your writing and message has changed in some ways since you started?

MP: It has. As an individual, you should grow and your music reflects that. It’s not different in what I’m trying to portray – the identity of who I was at the beginning is still there – it’s just a more mature, growing understanding of who I am. The stories that I write and the songs are personal stories projected in a way that is relatable to everybody, for people going through the same things, or those who have gone through those things at some stage.

DV: What are some of the extreme changes that you mentioned?

MP: It took about two and half years to develop this album. The changes I went through I speak about on a track on the album called “Transition of Life”. It got me at a point where I was leading back into a negative path of what I used to be, into making a transition of changing everything, pretty much battling personal demons, and changing into more of a leadership role and role model in my community. I became a father, I had two daughters in that time space, so it reflects going from a child to a father. Also, it’s a reflection of my journey of going through a negative period of my life, of being incarcerated then coming out and into a business mindset and turning that negative experience into a positive teaching method and a positive story to be told.

Mau Power did all of the recording for the new album at Beat Tank Studios in Melbourne over a period of two years.

MP: I do a lot of writing in the Straits, but there are times when I need to be outside of the Straits to capture inspiration. When I leave the Straits, I reflect back from an outside perspective on my life there. Sometimes you have to step out of your own environment to see it in a new way. A lot of my writing was done in Melbourne. The reason I recorded in Melbourne is because the sound and the energy was there. I searched around for the sound that I wanted and that’s where it was.

DV:   Do you consider yourself to have been the first major Torres Strait Islander hip hop artist?

MP: In terms of making it into a business?

MP: Yes, I mean, the culture of hip hop came to me when I was really young, everybody in the Straits got a wave of this culture, the music. Back then it was Public Enemy, De la Soul, those songs were coming out, breakdance was in, the movies Breakdance and Wild Style came through here like they did throughout the world, so we were introduced to it at a young age and pretty much connected to it at that young age. We didn’t know why it made us feel good, but it did… the freedom of expression, it became part of our lifestyle.

I started writing raps when I was really young. At high school we’d battle rap, but no one at the stage was doing it as a career. I made a choice from a really young age that this was what I wanted to do. While I was at school, I said, “I’m going to be an MC/rapper number one; an engineer number two; and working in the fishing industry number three.” Those were my goals and my whole life has been a journey to becoming that MC. I went to Brisbane and recorded the first ever single that came out from a Torres Strait Island hip hop artist. Until then nobody else was doing that. At that time rap was not really considered or accepted completely in the Straits, or anywhere. The older generations held a stereotype around it, there was a lot of judgement, but I stayed with it and pursued it as a career. Eventually people stepped away from that stereotypical view to seeing what the culture could provide. Now, hip hop is one of the major drivers for initiatives and workshops throughout the Torres Strait.

DV: That must make you feel proud?

MP: Definitely, when I look at it now, education, health organisations, they all tap into hip hop and see the opportunities it provides.

DV: Finally, how would you sum up the message that you’ve sent out in your music throughout your career?

MP: The message we provide is not focused on ‘These are the problems’, or ‘What should one do’, not giving solutions but giving people the opportunity to feel, ‘I am the master of my own destiny’, and ‘These problems or issues surrounding me can either enslave me or empower me’. We want empowerment, self-determination, that’s what I believe. Sometimes you can’t change the world, but you can change an individual, and then inspire them to change the world.

‘The Show Will Go On’ will be released early this year and followed by a national tour.