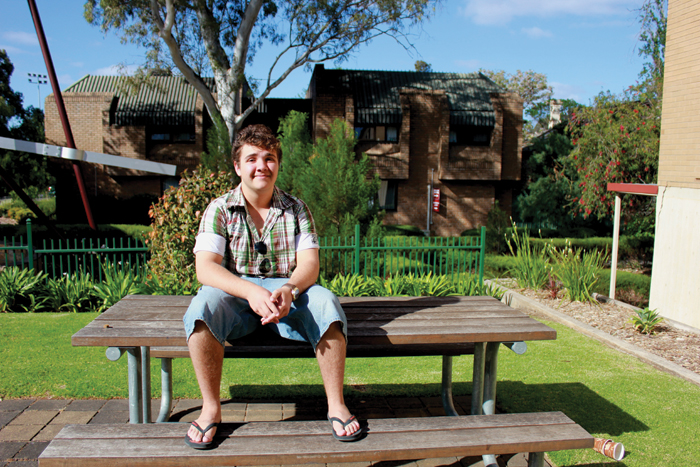 Chaise describes AER as a continuation of the first book, Second Life. “AER sees the main character Nathan, who now goes by the name Aura, and his colleagues find a common ground to stand on, and all of them join up to found the Federation. However, with problems between members of the Guard and members of the Congregation still stirring, the Federation isn’t yet fully functional,” Chaise says.

The 16-year-old says he has further developed his characters in this book. “We see characters’ pasts come into full swing, and Michelle and Oka find themselves in different kinds of trouble. Many of the characters are going through developmental phases with each other, and brewing problems will see that the factions will have to work on a way to function, or be destroyed under the imminent threat of the Firsts – the first race of people to ever step foot on Crystal – who have returned in powerful numbers and would like to see their world claimed back as their own.”

Chaise describes the series as “alternate-present fiction”. “My main character is called Nathan. He and a group of characters of equal age and ability are trying to free an alternate earth from the destructive force of another group. The first book just sets that in and the second book exploits that more. I focus on the perspectives of different characters throughout the book in different chapters as well – to try and get an all-world perspective,” he says. “The alter-Earth other world is called Crystal. This world is larger than the current Earth and it has the same concepts that Earth has except a bit warped and magnified. The countries are still the same but they are more like regions.”

Prior to these two novels, Chaise wrote short stories. He is writing the third instalment of the series now. He has a strict routine for writing. “I try to write every day, mostly in the evening – a few thousand words a day,” he says. “I have it all in my head, what I would like to write, but sometimes other ideas come in instantaneously and I try to incorporate them into what I have already got. I have an A3 sketchbook that I plan things in as well as notes on my PC. They are all there in an ordered chaos.” Chaise says he first got the idea for the series about two years ago. “It did not come fully-formed. My basic premise is I wanted a group of characters to free earth from a totalitarian world. I was not sure how I was going to do that but I am working it out,” he says.

Chaise is in Year 11 at Prince Alfred College in Adelaide. He says he likes being at boarding school and living centrally and living with all of his mates. His influences as a writer include Michael Crichton (Jurassic Park), Suzanne Collins (The Hunger Games), and Scott Westerfeld (Leviathan series). “I also have an interest in Criminology. I would like to do my writing alongside working in the police force or something like that. I want to study criminology and law – hopefully in Adelaide or Melbourne. My other interests are reading and photography,” he says.

Chaise was a 2012 Deadlys® finalist for the Outstanding Achievement in Literature category with his first book Second Life. He was up against some tough competition, including the winner Ali Cobby Eckerman for Ruby Moonlight. He is a descendant of the Muthi Muthi, Wamba Wamba Nations, and grew up at Tyntynder South, northwest of Victoria. He is the youngest of three children and began to show an interest in writing at the age of 13. He began writing early and was mentored by his grandmother. AER (Second life II) is published by Xlibris and is part two of the Aurora Trilogy, an adolescent fiction-fantasy series.