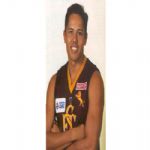 Thanks to the good work of people like Neil Marshall, more Aboriginal young people in WA are completing Year 12 than ever before. Deadly Vibe reports.

If anyone knows the importance of a healthy mind and body, it’s Neil Marshall. A senior education officer with the Commonwealth Department of Education, Science and Training in Perth, he is also vice captain of WAFL team Subiaco and a former West Coast Eagle.

Neil’s job is to ensure the 1,400 or so Indigenous young people within his caseload area get the most out of their education. He achieves this through the coordination of a number of proactive programs designed to make the learning process both enjoyable and meaningful.

One of these programs is the Aboriginal Tutorial Assistance Scheme (ATAS), which provides one-on-one assistance to those primary and secondary students struggling with schoolwork in the form of tutors.

“ATAS has been around for over 10 years, but it wasn’t promoted enough in the early days,” says Neil. “Now, thanks to all our field officers who are out there actively promoting it, we’re seeing a huge increase in the number of students utilising the scheme. In my caseload area alone, there are 150 students receiving direct tutorial assistance.”

The proof of ATAS’ success is in the graduation pudding. Last year an unprecedented nine Aboriginal students from Perth’s Lockridge Senior High School completed Year 12, thanks in part to the assistance of tutors and mentors. The great result garnered a write-up in The West Australian and Neil hopes the number of Aboriginal students completing Year 12 at Lockridge and other schools will continue to grow.

Much of the energy that goes into Indigenous education comes from the community itself, that is, from Aboriginal Student Support and Parent Awareness (ASSPA) committees. There are 400 of these communities in Western Australia, and 43 in Neil’s caseload area alone.

“It’s a well-known fact that many Indigenous parents have had negative experiences within the education system, which in turn has become a barrier to participation when their own children are at school,” he says. “ASSPA committees break down those barriers because parents tend to feel more comfortable as a group. They are better able to make collective decisions regarding their children’s education.”

Neil is also involved in the coordination of the Vocational and Education Guidance for Aboriginals Scheme (VEGAS). This scheme administers everything from transition programs for prisoners re-entering the community, to career expos for secondary students featuring guest speakers like Anthony Mundine.

There are around 20,000 Indigenous students in Western Australia, and many of them live in remote locations. The state’s sheer size means field officers must cover many, many miles – often in off-road vehicles – to get to every classroom where there is an Aboriginal student.

“Metropolitan staff members like me don’t get a feel for the issues a lot of the field officers face out there,” says Neil. “They have to grapple with things like dirt roads, flooding and lack of mobile phone access a lot of the time.”

He might work in Perth, but as a Nyul Nyul fulla who grew up in Broome, Neil understands the importance of ensuring Aboriginal young people get the most out of their studies irrespective of where they live. And sometimes the delivery of that undertaking requires a coordinated approach.

“Otitis media, or glue ear, is a significant problem among school-aged Indigenous kids. While treatable, middle-ear disease can result in conductive hearing loss. A lot of kids simply can’t hear properly, and this impacts on language acquisition, literacy and learning development. So we’re working with the WA Departments of Education to address this through schools, parents and health services.”

This includes the installation of audio systems in classrooms to aid hearing for those affected, regular health checks to help prevent otitis media occurring in the first place, and a number of resources for teachers, parents and students.

Neil hopes every Aboriginal young person will come to realise that education is the key to achieving in life.

“As an Aboriginal person I have acknowledged that the key to success in life is education. Assistance will always be available in some shape or form but at the end of the day you can’t help someone who wont help themselves. It’s often said that good things come to those who wait, but I disagree with this – if you want something, go out and get it. Set goals and be rewarded with that achievement.”