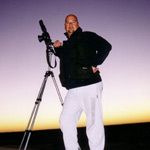 Indigenous photographer Wayne Quilliam has been making quite a name for himself across the globe with his striking, powerful images of Indigenous people.

His latest exhibition, Shades of Black, was held at the Kluge-Ruhe Gallery in Virginia, USA for three months, until the end of January this year.

“People from the gallery saw my work at an auction, and contacted me to see if I would be interested in exhibiting there,” says Wayne. “I told them I’d be on the next plane!”

The exhibition took over 12 months to organise, with Wayne choosing the included images carefully.

“I called it Shades of Black, because I wanted to illustrate how different we all are,” he explains. “There are pictures of my mob down in Tassie who are more light-skinned, then there’s the Torres Strait Islanders who are darker-skinned, and then there’s people from the Top End who are different again.”

Wayne’s goal was to create a platform from which he could positively promote his people and culture on the international scene. He also delivered a series of lectures on Aboriginal culture at the University of Virginia as well as a variety of art, community and photography groups.

“Americans are very interested, but they don’t know much about us,” says Wayne. “For instance, this one woman came up to me and said ‘That Tasmanian Devil, does it really spin round really fast like it does in the cartoon?’ I had to stop myself from laughing.

“And a lot of American people don’t even know where we are geographically, thinking we’re somewhere near England or something. And they don’t believe how big our country is, either.”

While Wayne was in the US, he also travelled to New York to shoot for the acclaimed Archetype magazine, before moving on to Los Angeles to work with some of America’s leading artists.

He has also recently sold a number of prints at successful auctions both in Sydney’s Lawson Menzies Auction House and the famous Sotheby’s Auction House in London. Buyers came from as far away as France and Germany to snap up a Quilliam original.

“I want to expose the world to our culture in an accurate way,” says Wayne. “And I’m hoping that this will open up opportunities for other Aboriginal artists to have their worked exhibited overseas.”

Wayne is now working on several new Australian exhibitions, so keep your eyes out for this talented man and his work.

Melbourne photographer Wayne Quilliam bought his first camera in Hong Kong while he was still a 17-year-old Navy communications officer.

It might seem an unusual start to a photography career, but the story gets stranger still. Tasmanian-born Wayne then hung up his camera for a few years until, at age 21 when he was sweeping chimneys, he found himself looking at a wall of photographs in a customer’s house.

The photos were taken by the woman’s late father, who had left behind lots of darkroom equipment that no one was using. Young Wayne was so fascinated by the whole thing that he did a deal with his customer, and took the photographic equipment as payment for sweeping the chimney.

“I set up my bathroom as a darkroom and that’s where it all took off,” says Wayne.

He travelled around Australia a lot, took photos for the Koori Mail, and recorded lots of different events, such as the Coming of the Light Festival in the Torres Strait, and Croc Festivals.

“I try to inspire young people to do what I do,” says Wayne. “Some young people also send me their shots so that I can give them feedback.”

Wayne says his favourite type of photography is “the blackfella stuff”, closely followed by artistic nudes.

“Blackfellas don’t like to get their gear off,” he says, “but what I’m trying to do, in a limited way, is to get some of our guys and girls into the mainstream overseas.”

He tints his black-and-white nude photographs with ochres and dyes drawn from the model’s land. “It’s like getting back to mother earth,” he says.

Meanwhile, he would like to put his photos somewhere so that Indigenous people can access them whenever they like. Many of the blackfella photos he takes are for exhibition only and not for sale. “I want to highlight the beauty of our culture,” he says.

Wayne has travelled to lots of other countries – such as Germany, France, Sweden and Italy – to exhibit his work, and this year will travel to Greece to coincide with the 2004 Olympic Games.

But closer to home, any fans of Richmond footy club will also have seen Wayne’s work. He is the official photographer for the club and has taken heaps of photos of star player Dave Rodan!