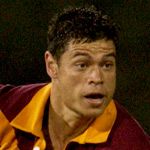 Timana Tahu is probably the highest-profile Indigenous player to switch clubs this year, leaving the Knights for the Parramatta Eels on a three-year contract. At his new club, Timana will join exciting Indigenous back-rower Dean Widders as the Eels try to rebound from a disappointing 2004.

When Timana Tahu’s name appears in the media, it’s usually thanks to yet another scintillating performance for his club, state or country.

But this year, Timana’s name has been linked to as much off-field speculation as on-field action, as his contract with the Newcastle Knights finishes at the end of the 2004 season. And being the talent that he is, rival NRL clubs are lining up with the hope of capturing the signature of the country’s number one flanker.

While the idea of playing in Sydney is appealing, the decision is one of the hardest that Timana has faced. That’s because he has been at the Knights ever since he was 14. He has played his entire footy career in the area and made his way up through the ranks as a junior to become one of the team’s biggest stars and most popular players.

Despite the distraction of contract rumours and gossip, coupled with a hamstring injury that kept him on the sidelines for several weeks, Timana has still managed another above-average season, once again representing his State at the game’s highest level while continuing to be one of the Knight’s strike players.

Outside of football, Timana is a proud family man and father of three.
(story 1/7/2004 end)

After a big strong first season with the NRL ion 2000, Timana has started off strong again in 2001.

Timana has been nothing short of outstanding this season, inspiring the Knights with his unique ability to create something out of nothing. Last year he broke his club record for most tries in a season (20), making him the NRL’s next to top try scorer, just behind St George/Illawarra’s Nathan Blacklock.

Tahu’s speed to burn makes him one of the fastest players in the Newcastle squad and Knights supporters are always brought to their feet every time he touches the ball.

We wish Timana well for the remainder of the season and hope to see his try-scoring tactics shake up the State of Origin later in the year.