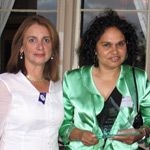 Two Aboriginal women who have been doing just that have now been acknowledged by the NSW Government.

Professor Sandra Eades, winner of the 2005 Deadly Award for Outstanding Contribution to Aboriginal and Torres Strait Islander Health, has been named NSW Woman of the Year in recognition of her work with Aboriginal women and children.

Sandra, who was the first Aboriginal medical doctor to be awarded a PhD, is a senior research fellow in Aboriginal Health at the Sax Institute, Sydney and conjoint professor in the faculty of public health at the University of Newcastle.

She was the first researcher to show a strong link between infant health and social factors such as education and access to housing. Her current research involves culturally specific smoking intervention for pregnant Aboriginal and Torres Strait Islander women, and the establishment of a major study among NSW Aboriginal children and families attending urban Aboriginal Medical Services.

Also gaining acclaim for her work in Aboriginal health was a local hero from the south coast of NSW. Iris McLeod was the inaugural winner of a new recognition and rewards scheme created by the NSW Department of Aboriginal Affairs to highlight the achievements of people who are making a difference in Aboriginal communities across the state. Iris received the award for her work at the Nowra Aboriginal Medical Service.

Iris was born, raised and educated in Narrabri, on the north west slopes of NSW, and had her first job in the health industry at a nursing home in Petersham in Sydney.

In 1979 she started a training program at the Nowra Community Health Centre where, after just 15 months, she was appointed as an Aboriginal Health worker at the centre. It was during this time that she began her lifelong campaign to make the health system more responsive to Aboriginal people.

Since then she has helped thousands of Aboriginal people navigate the health system, improving their health and well-being outcomes.