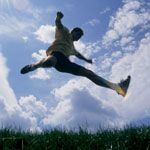 Get up off the lounge, turn off the TV and get yourself moving ” your body will thank you for it.

It’s a harsh truth ” as a society, we’re getting lazier. We drive everywhere instead of walking, we change the television channel with a remote control, we eat home delivered food instead of cooking, and we play computer games instead of football.

All this inactivity is causing more than just spreading waistlines. Physical activity plays a critical role in reducing the risk of heart disease ” people who aren’t regularly active are almost twice as likely to die from coronary heart disease as those who do. Being inactive also increases your risk of developing other diseases such as diabetes. Ultimately, physical inactivity ranks only second to smoking in terms of the burden of disease in Australia.

There are some common social and environmental barriers to exercise, including living in a remote area with limited access to exercise facilities, or not being able to afford expensive gym memberships. But being active enough doesn’t require you to become a gym junkie or a professional football plater. All you need is your own feet ” walking is a great way to get active.

An important thing to remember is that it’s not about how hard you exercise; it’s about how often you exercise. Here are some suggestions to help you start an exercise program and stick to it.

Being active and exercising regularly are essential if you want to avoid becoming overweight and being at risk of a whole host of serious illnesses. Make the decision to start being more active today ” you won’t regret it!

Some facts from the Heart Foundation