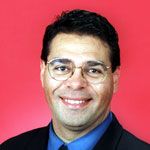 In July 1999, Aden Ridgeway entered the Senate as Australia’s only Indigenous Federal politician ” becoming only the second Aboriginal person ever to take a seat in Federal Parliament in Australia’s history.

As of July 1 this year, there will be no Indigenous representative in the Senate. Aden lost his seat in the October 9 Federal election ” a crushing blow to his party, the Democrats, and to Indigenous people across Australia. But like any good role model, far from letting this hold him back, Aden is as strong and positive as ever. So what, or who, inspires him?

A Gumbaynggir man from northern NSW, Aden was strongly influenced by his grandmother while he was growing up, and names her as his greatest role model.

“My grandmother was my main mentor and influence on my life,” says Aden. “Through listening to stories about her life experiences and sharing in her knowledge, I learnt a lot about myself and what values are really important.

“She taught me the importance of exposing my own ideas to the scrutiny of others, as well as the need to win the support of my opponents by the strength of my own argument. My mother also had a similar influence on me.”

Apart from his family, Aden also sees Aboriginal activists as strong role models ” people who fought for the rights of Indigenous Australians, often in the face of extreme adversity.

“In the same way as my mother and grandmother provided continuity for me through my family and culture, so do past activists provide that kind of continuity through the broader Aboriginal community,” he says.

Aden names William Cooper, who was an Aboriginal activist from Victoria in the first part of last century, as well as Gary Williams and Gary Foley, and of course, Charlie Perkins and Pat O’Shane, as particular role models.

“I also get a lot of inspiration from Faith Bandler and the role she played in our struggle,” he says. “Any of us who are doing anything political continue the work of the activists who have gone before. If you don’t know who these people are ” look them up! It’s as important to know our recent political history as it is our culture.”

Aden believes that it is important that more Aboriginal and Torres Strait Islander people become involved in politics at all levels.

“It’s about time the major parties started pre-selecting Aboriginal people for winnable seats and Senate spots,” he says. “They have been starting to do better on this at a State and Territory level, but not yet in the Federal parliament.

“The other side of that is that our people have to be willing to step up to the mark and put in the hard yards to get known and get runs on the board. Special seats for Indigenous people, like they have in New Zealand, could be considered, but I think that would only be a temporary measure.”

As a politician himself, Aden is a powerful role model for Aboriginal people of all ages. This is something that he is very aware of, and his main aim is to show young Indigenous people the many choices and opportunities that are available.

“I say that education is important,” he says. “But at the same time, if you drop out of formal education it’s not the end of the world, as long as you keep learning.

“It’s also very important to have a mentor or friend to help you get through the tough times, to give you advice and help you make the right choices.

“I have a responsibility to show that kind of leadership and I have made it a priority to talk to young people about this stuff since I’ve been in these types of leadership roles.”

So what is on the agenda for Aden after July 1? He plans to remain active with the Democrats on a local level, and also to stay involved in Indigenous affairs ” something he was part of long before he became a Senator.

“I also plan to pursue my interests in tourism and education,” he says. “And I’m keen to break down the glass walls of corporate Australia to create pathways for young Indigenous people to follow. I’m considering possibilities all in those areas at the moment. Stay tuned!”