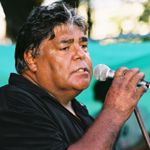 Absent Friends Deadly Vibe Issue 116 October 2006 A lifetime of achievement is acknowledged but where was everybody? One of the most important awards of the night, the Jimmy Little Lifetime Achievement Award for Contribution to Aboriginal and Torres Strait Islander Music was marked by the absence of its two main players ” the award’s namesake and the award winner. Jimmy was all set to present the award, but a last minute illness meant that he was unable to attend. To further the crowd’s disappointment, a mix-up with travel arrangements meant that the man who was to be honoured on the night for his achievements in music Roger Knox also couldn’t make it on the night. Despite this, Roger is still a worthy recipient of the award that, each year, pays tribute to one of Indigenous Australia’s musical greats. Previous recipients include Kev Carmody and Mandawuy Yunupingu. Roger, who is often referred to as the “Koori King of Country” or “Black Elvis”, has dedicated his life to sharing the gift of music with the world, spending much of his time playing to neglected Aboriginal audiences in remote communities and prisons, as well as touring detention centres and Indian reservations in the US and Canada. Roger was named NAIDOC Artist of the Year in 1993, and has also been inducted into the Australian Country Music Foundation’s Country Music Hands of Fame. To make up for him missing out on the ceremony, the Vibe crew will be presenting Roger with his award at next year’s event.