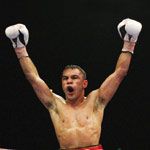 He made it to the top despite the odds ” Deadly Vibe salutes two of our greatest Aboriginal boxing champion.

Our most recent Indigenous world title-holder has come into the ring with the same kind of passion and heart that typified Lionel’s own fighting spirit.

Queenslander Robbie Peden, nicknamed “The Bomber” for his entertaining attacking style, clinched the IBF Super Featherweight world title back in February in a hard fought battle against American Nate Campbell. Now that he has the title, Robbie is determined to hold onto it, and is currently in preparation for the toughest fight of his career, his first title defence against Mexican Marco Antonio Barrera.

Barrera is known as “The Baby Faced Assassin” and has amassed a record of 64 wins and four losses with 42 knockouts. He is a legend of his division and a champion himself, holding the WBC Super Featherweight world title. The clash of the two champions is set to take place at the MGM Grand in Las Vegas on September 17 th, when both fighters will be putting their worl d t itles on the line.

Deadly Vibe wishes Robbie all the best for the fight and is looking forward to seeing Robbie return home with another world title belt to add to his collection.