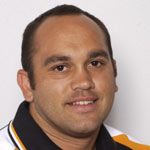 Robbie joined the Penrith Panthers Club in 1993 and has established himself as one of their more senior players.

In 1999 he joined a rare club of senior players to have played 100 first grade games for Penrith, and has also scored over 50 tries for his club.

Robbie’s speed and great body strength gives him the ability to score tries from just about anywhere on the field.