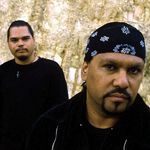 How fantastically well are these guys rockin’? NoKTuRNL have so much to say and all the energy in the country to get their message across and get it across LouD! The boys have toured with Spiderbait, supported Powderfinger and Regurgitator, and one of their songs featured in the AFI award-winning film Radiance.

NoKTuRNL first came to national attention when they toured with top Australian band Spiderbait in 1997. That year they also played the Pushover Youth Festival in Melbourne and the Manly Youth Festival in Sydney. The boys have made three video clips with SBS and been recorded “˜live’ for Triple J’s Australian Music Show.

1998 was an even bigger year for the band. They met up with Public Enemy on ABC TV’s Recovery and were the focus of an SBS documentary. NoKTuRNL also laid down some tracks in London, one of which, “Sage”, was used in a short film called Saturday Night, Sunday Morning. But the highlight of that busy year was their win at the 5th Deadly Music Awards in Sydney, where they were named Band of the Year.

NoKTuRNL’s debut single “Neva Mend” also features the additional songs “No Respect” and “New Era”. The boys went off at this year’s Big Day Out series, and “New Era” has been included on the Big Day Out compilation. Nominated for another Deadly this year, who knows where these stormin’ lads will go to next?

The music industry is a fickle one – the boys of NoKTuRNL know this as well as anyone. As in all trend-driven markets, what’s hot one week is quickly forgotten the next as consumers clamour for something new and something fresh.

NoKTuRNL, on the other hand, are not so inclined to fitting moulds. They would much rather break them. In fact, they don’t just break moulds – they smash them into pieces with the same kind of venomous ferocity with which they perform their passion-felt metal anthems. They then fit the pieces back together to create entirely new moulds for the rest of us to adjust to.

Proving impossible to be classed, styled or hemmed in, it is understandable that in a genre-driven musical climate, NoKTuRNL has become somewhat of an enigma.

Not so long ago, NoKTuRNL was the toast of the Australian music industry, touted far and wide as the “next big thing”. They were black, they were loud and they were in demand. Then, in true industry fashion, as abruptly as it had arrived, the love was gone.

“We feel a lot more cautious about the album release compared to any others,” says Craig. “I think that’s because over the last few years we’ve been through the music mill, you could say. We went through a phase where we were hyped to the max, where everyone in the industry was talking about us being the next big thing, telling us all these great things, to then watching our profile fall all the way down to the point where we lost all support from the industry in the areas that we needed.”

Over the years, the group has looked adversity in the eye and grown from overcoming it, drawing on the same motivation that has inspired them throughout their careers. Band members transformed the tough experience into material for the new album, Time Flies.

Groups of a different calibre or background may have wilted, however the NoKTuRNL guys say wouldn’t have it any other way.

“It’s great to finally have the album released – it’s been a long time coming and that’s partly why the album is called Time Flies,” says Craig. “The album is a compilation of different recordings that we have made at various places with different people. It expresses a whole range of vibes and styles that we were going through at different times.”

NoKTuRNL’s uniqueness has always been one of its greatest strengths, and it was this quality that brought the band to the music world’s attention. Without a doubt, the group is one of Australian music’s most interesting and engaging ongoing musical evolutions.

“Our music is now much more mature and song-orientated rather than genre-orientated,” says Craig. “We have tried to incorporate pop sensibilities into our music without relinquishing the hard-core element.

“Our songs now have a much greater sing-along factor, which is purely directed towards getting greater radio airplay. Basically, we have all grown a lot more as musicians and songwriters.”

The necessity of such things as pop sensibility and radio accessibility to survive in today’s music world doesn’t mean the boys have sacrificed their hard-edged and thought-provoking lyrics. If anything, their newfound subtlety has only enhanced the pertinence of their lyrics. And while the full-length debut introduces a slightly different approach, the message behind the music remains.

“The message is always there – it’s just not as brutal as it used to be,” says Craig. “Before, we would really shove it down people’s throats, but over the course of the last few years we have learnt a lot. We have become more poetic and more accessible.

“There are two main themes that run throughout the album – looking at the way things are in the world today is one; the other comes from all the difficulties that we have faced as a struggling band. We have tried to make social and political comments as well as talking about our own situation.”

True to form, the album’s first single Sailing Away, although penned with radio in mind, doesn’t conform to stereotypes in any way.

“Sailing Away is about refugees and the idea of sailing away to nowhere, to be detained and have your freedom taken from you,” Craig says. “I tried to put myself in the shoes of these people and explore what it would be like to have your freedom stripped from you and not being able to follow your own path. We released this song first because we felt it was the strongest song for radio.”

Sailing Away has already jumped to the top of requested song lists in Darwin and is receiving considerable airplay, most significantly on commercial stations where NoKTuRNL are proudly receiving acknowledgement for the first time.

“It’s a great surprise for us because we haven’t always had that support and it’s not something we take for granted,” Craig says. “It’s good to know we have that kind of support out there from our local people. It shows that they are proud of us and our work, and that’s a great form of acknowledgement.”

NoKTuRNL knows that acknowledgement and recognition isn’t something that comes overnight – it is something that they have strived for and worked hard to achieve for many years. The guys remain as ambitious and determined as ever to gain the respect of music fans.

“Audience acceptance is the most important and hardest thing to achieve,” Craig says. “With industry people, you can be accepted purely on your image or the way you look. Audiences are much harder to impress. You have to work hard to win them over and get them on your side. In the end, it is only the audience that matters.”

Over the years, NoKTuRNL has worked hard to rearrange the expectations and attitudes of audiences before winning them over.

“We have always faced obstacles in overcoming assumptions people hold, coming from the point of view of being an Indigenous band,” Craig says. “I’ve seen situations where, once people hear that an Indigenous band is playing next, they will grab their friends and walk away to the bar. That happens a lot.”

For Craig, the NoKTuRNL journey so far is only the beginning of a promising road. And with the much anticipated first album behind them, he thinks the boys are just hitting their stride.

“With this album, we are really only just touching on a lot of the things that we can do,” he says. “We always believe that we can do better and we have a lot more to put out yet. We can’t wait to keep going, developing our music and our style, and exploring where we can go. NoKTuRNL has always been an evolution.”

Thankfully, for the many NoKTuRNL fans out there, the evolution that Craig speaks won’t be slowing down anytime soon.

“We feel as though we have something to prove and we will just keep chipping away at that big block until we reach the place where we want to be,” he says. “Adversity only makes us stronger.”

NoKtuRNL have done it again. For a record third time, Craig Tilmouth and Damien Young have rocked the Deadlys and walked away with the prestigious Band of the Year award.

Despite the fact that the boys have won the award before, they were just as surprised as ever at being named as this year’s top Indigenous band.

Damien added: “We just want to play, so thanks for everyone for coming here tonight. Thanks for voting for us and we hope to see you all again next year.”

NoKTuRNL rode to their record third Deadly award on the back of the group’s most eventful year yet. Earlier this year, NoKTuRNL released their first full-length album, Time Flies. The album quickly garnered glowing reviews and the first single, Sailing Away, shot to the top of commercial radio play lists.

NoktuRNL’s first Deadly came in 1998, after they leapt from relative obscurity in central Australia to the top of the music industry.

Their meteoric rise was capped by the Deadlys recognition, establishing the hard rock group as one of the most exciting, vibrant and deadly Indigenous acts around. The boys backed up their win two years later, walking away with the top band trophy once again.

For many years NoKTuRNL, touted wide and far as Australia’s most promising Indigenous band, have stood on the brink of greatness. Now it seems their time is at hand. With their exposure and popularity at an all-time high, who knows how many more Deadlys may be in store for the talented duo.