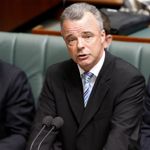 Opposition leader Brendan Nelson has called for the baby bonus introduced by the previous Howard Government in 2004 to be withheld in Indigenous communities.

Introduced as a means to boost birth rates, the bonus is set to increase to $5000 on July 1.

Speaking at the National Press Club, Dr Nelson has stated his belief that the bonus should not be given to mothers in remote Aboriginal communities but instead paid into an educations trust fund. He also claimed that it was irresponsible for the Rudd Government to be dumping so much money on Aboriginal mothers in these communities.

“One of the changes that has to be considered in terms of the baby bonus is the way that money is delivered like a human tornado into remote Aboriginal communities with all of the devastation that it has,” he said during his speech.

Dr Nelson also said he did not care if he was criticised for his stance on the issue.

“I don’t care if I’m accused of being patronising.

“When you have four or five thousand dollars turn up into an impoverished community which is dysfunctional in every way, shape and form, it has a devastating impact.

“I argue that most of that baby bonus should be invested, instead, in a trust for that Aboriginal child to support his or her education when they reach school age.”