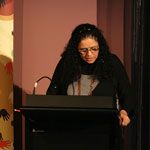 SNAICC Chairperson, Muriel Bamblett, AM, said today that, “after raising expectations that they would do whatever it takes to the close the gap between Indigenous and non-Indigenous children the government has not made the necessary commitments to early learning and childcare. We need to close the gap between the pre election promises and the progress.”

“Aboriginal and Torres Strait Islander people, particularly those outside the Northern Territory, should feel let down by this budget. The new government has to be able to manage the Northern Territory Intervention without falling behind on other key election commitments. If it does it risks wasting the good will generated through the recent national apology,” she added.

She said, “Prior to the election Labour promised that, ‘All Indigenous four year olds will be eligible to receive 15 hours of Government-funded early learning programs per week for a minimum of 40 weeks a year’. In the budget papers this appears to have been watered down into a commitment limited to Indigenous children from remote communities – leaving the 75% of Indigenous children who live outside remote communities out in the cold.”

Ms Bamblett added, “In their pre-election policy the ALP also estimated that at least $21 million per year was needed to provide early learning services for the 4,500 Indigenous four year olds that currently miss out. No specific funding let alone $21 million was earmarked in the budget for this purpose and next year 4,500 four year old Indigenous children will still miss out on a better start in life.”

She said, “The 2007 Coalition budget provided an extra $37.3M for new Indigenous child care hubbs and playgroups. Before the election Labor promised to ‘build on this commitment’, ‘expand early learning programs into Indigenous communities’ and ‘introduce a comprehensive package focussing on Indigenous children’s early years.’ The first ALP budget contained no comprehensive package and no extra funds to build on and develop additional early learning and child care services for Indigenous families.”

She added, “Contrast this with the extra $1.6 billion over four years to increase the child care cash rebate. Indigenous families are significantly under represented in childcare, making up less than 2% of families accessing childcare with many of those families not eligible to claim the cash rebate. The budget funds a massive expansion of a mainstream childcare program from which little or no benefit will flow to Indigenous families – the families that have poorer access to childcare than anyone else.”

Ms Bamblett, concluded, “The government is still relatively new but it has to do better. They need to get on with developing the promised comprehensive early years package. They can do this by ensuring that a fair proportion of all their early childhood budget measures are specifically directed towards Aboriginal and Torres Strait Islander children. These children make up 4% of Australia’s children and its time they got not a penny less than 4% of the billions of dollars flowing into childcare and early childhood funding.”