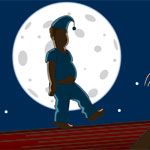 Some of us go walking in our sleep ” but why?

Sleepwalking is a fascinating, but often misunderstood condition that is more common in children ” around 15 per cent of children sleepwalk regularly compared to around two per cent of adults.

Sleepwalking can be anything from sitting up in bed to getting up and wandering around the house or, in some cases going on a 160 kilometre train trip as a young boy from Illinois in the United States did in 1987!

Some sleepwalkers perform quite complex tasks, such as sending a text message to a friend, feeding their pets or making something to eat. There have even been cases where a sleepwalker has attacked or even killed someone in their sleep.

Sleepwalking occurs when there is an abnormality in the brain’s transition from deep sleep to dreaming sleep. Most people actually become paralysed when they dream, but sleepwalkers do not.

Sleepwalking has a genetic cause, as it often runs in families. But it can also be triggered by external factors such as sleep deprivation, disrupted sleep schedules, stress or fever.

Around 30 per cent of people will have a sleepwalking episode in their lifetime (usually when they’re a child), but a person is only defined as a sleepwalker if they have repeated episodes.

Waking a sleepwalker won’t make them die of shock, as some people believe, but they may be confused or bewildered if you wake them, and they may become agitated or angry. The best tactic is usually to take a sleepwalker gently by the elbow and lead them back to bed. Sleepwalkers rarely remember a sleepwalking episode.

If your child sleepwalks, make sure your home is safe and secure (lock doors and windows, and clear the house of anything they might trip over or fall on), and that they have a regular sleep routine.