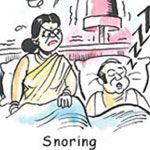 Snoring can do a lot more than just annoy other people.

Whether it’s a thunderous roar or a whistling snuffle, snoring can be extremely annoying to those around you. But even worse than the noise that emanates from a snorer’s gaping mouth is the health problems that this conditon can cause.

Snoring is a common sleep disorder caused by collapse of the upper airways. The noise comes from the vibration of the tissues lining the air passages. It can be caused by a narrowing or blockage of the upper airway passages due to illness such as a cold or sinusitis, as well as other things that can cause congestion in the tissues of the airways, including smoking, alcohol, acid reflux, obesity and age.

Can it be a serious problem?

In some cases, snoring can be caused by obstructive sleep apnoea. This occurs when the muscles of the throat collapse during sleep and block the windpipe, meaning the sufferer actually stops breathing for short periods throughout the night. This deprives the body and the brain of oxygen, causing the sufferer to feel tired in the morning and during the day. Sleep apnoea puts severe strain on your body, which can lead to high blood pressure, heart attack and stroke. Sleep apnoea can be controlled by the use of a special breathing device.

What about snoring in kids?

Childhood snoring can indicate an enlargement of the tonsils and the adenoid tissue, or a blocked nose due to allergies. These conditions can be treated by a doctor or, in some cases, surgery.

What can be done?

Losing excess weight, quitting smoking and cutting back on alcohol can make a big difference. You should also:

Sleep on your side rather than your back;

Use a flat pillow.

Research has also shown that playing a didgeridoo can help with snoring and sleep apnoea. This is due to the training the upper airways get from the circular breathing techniques you need to learn.

Snoring can also be reduced by wearing a special dental device, which a doctor or sleep specialist can provide. In extremely severe cases, surgery may be necessary.